JuNene K.: Finding the Superwoman Within 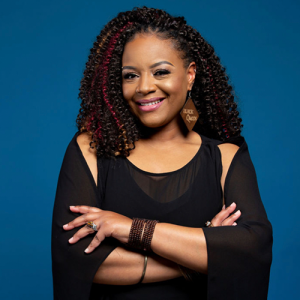 JuNene K. has a mantra: “Go confidently in the direction of your dreams. Live the life you have imagined”—words that come from the philosopher and poet Henry David Thoreau. They’ve guided JuNene’s life, and she shows early childhood teachers how to put them to work as a social emotional specialist, keynote speaker, educator and CDA® instructor. “I help folks be the best version of themselves,” she says, “through endless motion of the mind, body and spirit.”

Those are the three components of her business, Perpetual Motion Studios, she says. “I want people to ask if they’re affirming themselves through what they think. Are they moving their bodies in ways that help them get out of the humdrum? And are they connecting to something higher than themselves? — key questions for the early childhood profession. “Everybody is thinking about the children, but not enough people are looking out for us. Our job is to help children learn to be their best, but we also need ways to learn how to be our best. That’s why my focus is early childhood teachers.”

In October, her focus will be on the educators who attend the Council’s Early Educators Leadership Conference. “I’ll be doing three sessions,” JuNene says. “The first will be on affirmation and how to harness ‘The Power of I Am,’ the most potent words in the English language. In the second session, ‘Gratitude is Attitude,’ we’ll discuss how to deal with negative feelings. And the last will be ‘The Shift,’ a hands-on session that explores the use of essential oils to shift your mood. We’ll also be doing fun, creative workouts and line dancing to get our juices flowing and get rid of stress.”

Movement matters for early childhood educators, as JuNene points out. “Let’s say you’re with the infants and you’re standing all the time. Sure, you might be crawling around on the carpet a little bit with the babies, but there’s not necessarily any opportunity to move in ways that make sense. When you incorporate physicality, you’re able to invigorate someone’s mind and awaken their spirit. So, I’ll be using music at the conference to inspire movement,” JuNene says. And she’s seen the impact this makes on both the body and the mind. “When we turn on a good song, our bodies start to move, our fingers start to wiggle, our feet start to tap. Then we feel different—and we start to think different, too.”

Moving is a big part of wellness and health, JuNene explains. “It helps you manage your emotions so you can be a better person. And that matters in our field since better people make better employees who can separate home life from work life. Say you’ve had a fight with your husband and then you bring those negative vibes to the classroom. You’ll wind up having an attitude that says, ‘I just don’t want to be here.’”

And JuNene has been there in a long career as both an educator and an entertainer. Twenty years ago, her work in musical theater brought her from Dallas to New York and launched her career in ECE. “I started working at Gymboree,” she recalls, “because I was looking for something that would give me the chance to audition for plays and shows. I’ve long been a singer, dancer, choreographer and director. But once I started working at Gymboree, I found that I also really loved being with the children and using my talents to perform for them.”

That’s when JuNene started learning about child development, as she recalls. “After returning to Dallas, I continued working at Gymboree for eight years and received the formal training I needed, including a bachelor’s in child development and psychology. While working at different child care centers, I started to think about how I could merge my passion for performing with my training as a social emotional specialist. I began by working with the children and then progressed to working with the adults who teach the children. My final goal, which I have achieved, was to become a master trainer so I could reach more people in the ECE profession.”

The world of early childhood conferences opened up to her after a chance conversation at her son’s preschool. “The director of the preschool told me I should go to a specific conference, and since then, I have presented at many of them. Speaking at the conferences showed me that there was a whole audience of educators that no one was reaching with what I had to offer in terms of life coaching and how to manage your emotions every day.”

The key message she wants to pass on is how to become the most authentic version of yourself. “I always put a spotlight on self-affirmation,” she says. “It’s incorporated in everything I say, and because of my physicality and passion, the message gets through. The educators I speak to can see that I’m genuine and sincere. My presentations are about more than the words I use. They’re about my life.”

Those who’ve been to hear JuNene speak know that she doesn’t just talk the talk, she walks the walk when she discusses the issues people need to deal with every day. “If you’ve ever been to one of my sessions,” she says, “you know that I’ve been divorced three times, dealt with death, despair and depression. I tell my own real-life stories and I think that’s my power.”

So is the emotional strength she showed when she cared for her brother after he had a heart attack and a stroke. “They put him in a vegetative state and didn’t expect him to wake up,” she recalls. “After the doctors decided there was nothing more they could do, they discharged him from the hospital with a trach and he came to my mother’s house. I became his primary caretaker and trained a staff to give him both physical and emotional nursing. He couldn’t see. He couldn’t speak, but he could hear. He responded to my mother’s voice and mine. And I think all the emotional care we provided helped him live two years longer than anyone expected.”

JuNene also went beyond the expected as she cared for her brother while working and raising two children. Her family called her a “superwoman,” but it wasn’t easy for her to cope, as she revealed to a group of CDA students who were struggling to get through the classes. Based on her time with her brother, she had some advice for all the students who felt they had to be superwomen and handle everyone else’s issues while neglecting themselves.

Sure, you can just put on a smile, she admitted, but sometimes you need to let your feelings out. “When you cry there is a cleansing that happens in both your spirit and body that no other activity can produce. Holding in all the stress of your life is like drinking poison all day. So, cry and let it out! It’s not our job to figure out how everything is going to work. We are not creators; we are only facilitators of what has been created. When you learn to let go, things happen—and you will feel better.”

She has also passed on this advice for coping with stress in her podcast Even Superwomen Need Therapy. “I started it on a little app,” she says, “and now I have viewers in Turkey, Italy and Africa, places where I never would have imagined getting my voice out. I talk about issues in mental health from a woman’s perspective and give an outlet to the many women, especially Black women, who feel they must do everything on their own.”

Early childhood teachers often feel this way as they try to balance their personal life with the challenges of their career. “It’s especially hard for them,” JuNene points out, “because our profession isn’t as respected as it should be. That brings down morale, so we need more focus on the social and emotional aspects of our profession.” And JuNene will provide it at our upcoming conference in October. She’ll get you to move, help you manage your feelings, and find the superwoman—or superman—within.

“When you’re self-affirming and think you can succeed,” JuNene says, “you can.” Or as Thoreau put it: “If one advances confidently in the direction of his dreams, and endeavors to live the life which he has imagined, he will meet with a success unexpected in common hours.” You’ll learn how at the EELC—when you spend some uncommon hours with JuNene.

Being a Bilingual Teacher in Early Childhood Education

As the population of young children keeps getting more diverse in this country, many schools and programs are seeking teachers and assistants that speak the languages needed in their classrooms. However, it is not enough...

Early Childhood Education as a Profession and the Investments Required

Early childhood education is finally getting its time in the spotlight. It’s great to see more and more funding going into programs that will make a difference for thousands of young children and their families....

Early childhood education (ECE) is in the spotlight as never before. Being in the limelight, however, has highlighted the field’s fragmentation and the variability in the quality of children’s formal early learning experiences. This reality...

Meet Dr. Valora Washington – the CEO of the Council for Professional Recognition

How would you like to find out about the life of an exceptional educator and the leader of the Council for Professional Recognition? This post recognizes our CEO, Dr. Valora Washington, who has been in...

Welcome to the Council Blog

Welcome to the Council and thank you for checking out our new blog. It is with great excitement that the Council takes the first step in the world of blogging to communicate with all of...