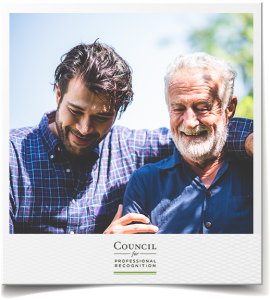 Aaron “Buddy” Rhodes comes from a family of educators. He grew up with positive male educator role models in his life, such as his grandfather and uncle. He first discovered his passion for teaching while he was in high school, when he would occasionally help his mother in her first-grade classroom. As he became older, he knew he enjoyed being around children and helping them grow, but he was not sure how to pursue his passion for teaching young children, since preschool education did not seem to be an option for men.

Buddy headed to college with plans to achieve a physical education degree. Life, varied interests, and new job opportunities altered his plans, but he couldn’t shake the feeling that his studies and work did not inspire him in the same way that he remembered early education had. About 10 years later, remembering his experiences in his mother’s classroom and the encouragement he received from positive male role models in his life, Buddy finally sought out the  opportunity to work as a floater in a few preschool classrooms. Not long after he began, he realized that this—early childhood education — was what he was meant to do all along. Working with young children, families and fellow teachers ignited his passion for child development. Within only six months, Buddy began to work on his Child Development Associate® (CDA) credential. After earning his CDA® , Buddy enrolled at Liberty University, where he earned a degree in Early Childhood Education. Currently, Buddy is the Educational Site Manager for The Campagna Center’s Head Start program in Alexandria, VA.

Buddy says he hasn’t “worked a day in the past 12 years” because he loves how he spends his days. However, he is concerned about the lack of men in early childhood education. Within his education team of 75 people, Buddy is the only male educator.

As we celebrate the men in our life this Father’s Day, it is essential to reflect on the important role men play in the lives of young children. Buddy knows firsthand how important supportive men are in a child’s life. While working at the Head Start program, he’s come to learn that some of his students live in homes without fathers. For many children in his program, Buddy might be their first male role model.

Buddy recognizes that societal factors can unfortunately push men out of the field and even prohibit men from considering early education altogether. For Buddy, earning his CDA ® provided him with a foundation for how to best work with children. To all men who are considering early education, Buddy encourages these men to find a mentor (male or female) and to learn all that you can from this mentorship.  Buddy was lucky to have family members to help him through his journey but has also encountered many motivating leaders along the way.

Buddy often reflects on the inspiration he received from his grandfather. The best advice he ever received was from his grandfather who told him at the end of the day, it is not about how much money you have in your pocket but enjoying what you do and taking care of your family. Buddy feels lucky to have found his passion and has a lot of pride in having spent more than a decade helping to shape children’s lives.

Usma Mohamed is the VP of Brand Experience and Marketing for the Council for Professional Recognition, which works to ensure that all professional early childhood educators and caregivers meet the developmental, emotional, and educational needs of our nation's youngest children.