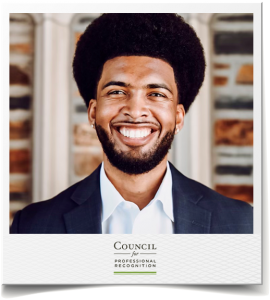 Clinton Boyd, Jr., Ph.D. is on a mission to empower Black dads. He knows the roadblocks they face because he became a father at the age of 15, is currently co-parenting an infant, and has worked with Black dads to navigate barriers to fatherhood. “I was a young father without access to the structural supports that would allow me to thrive as a parent,” he recalls. “What got me through was the love of my family. I will always be indebted to them for supporting me while I was struggling to find my way.”

As a former home visitor and fatherhood scholar at the Samuel DuBois Cook Center on Social Equity at Duke University, located in Durham, NC. Clinton used his experience as a young father to build a career standing by other men in similar situations. His current research and policy work examine parenting in Black families, with an emphasis on fathers. We must value a father’s impact on a child’s well-being, he pleads, since “children with involved, caring fathers have better educational and developmental outcomes.”

Unfortunately, “Black fathers face persistent societal marginalization that undermines their relationships with their children,” as Clinton came to see while serving as a family advocate in Chicago. “Early in my career, I worked as a family advocate for an organization called Family Focus. In my role, I connected Black fathers returning home from prison to community resources,” Clinton explains. And he learned something, too, while working with one group after another over a space of two years.

“The fathers who came to us looking for support had been failed by American institutions long before they became parents,” he says. “I soon realized that their problems didn’t come from personal failings. They were the consequence of irresponsible policies that disregarded their humanity and insidious cultural narratives that devalued them as fathers,” insights that inspired Clinton to pursue his Ph.D. so he could call attention to what he felt were “grievous injustices.”

Change, like charity, often begins at home. And Clinton’s graduate program gave him a chance to help develop Dad2K, a home visiting project in Metro Atlanta. “The goal of the program was to promote positive parenting skills,” he explains, “and most of the fathers we worked with were Black men from low-wealth communities. As a researcher in training, I visited with fathers in their homes and then worked with a team on ways to recruit, enroll and engage more men in the program.”

Clinton and his colleagues had to be responsive as they tried to do home visits with men who didn’t have homes. “Many of the men we worked with had criminal records,” he recalls, “and struggled to secure stable housing. They were literally couch surfing, moving from home to home, and that made it hard for them to reap the full benefits of a structured home visiting program.”

Another challenge was adapting the program to recognize the cultural value of multigenerational households in the African American community. He often found himself interacting with grandparents, aunts, uncles, siblings, cousins and family friends, along with many children. “In addition to centering on the fathers, we also had to tailor the program to the multiple caregivers who lived in a household,” he says. “It was important that they also felt vested in the program.”

He and his team helped everyone get on the same page by holding a family orientation session for all the adults on the first home visit. “We would conduct mini family orientations and give an overview of what we planned to cover with fathers during their time in the program,” he explains. “We also encouraged them to ask us questions about our personal and professional backgrounds, and our motivations for doing this work.”

That always went over well, Clinton recalls, and many of the families welcomed his efforts. “I have vivid memories of conducting home visits on weekends with one family. I was often greeted at the door by the father’s grandmother. It would be soul food Sunday, and she would often have a plate prepared for me at the table with the rest of the family,” Clinton recalls. Families like the one referenced here wanted him to feel at home because they understood the importance of fatherhood and what he was doing to support it.

And this family, as Clinton points out, epitomized the African proverb: It takes a village to raise a child. There are many loving Black families like this one and many Black dads who long to be deeply involved in the lives of their children. “Yet the Black family, as an institution, has been under perpetual assault since the transatlantic slave trade,” he says, “and Black fathers have been victims of cultural myths that suggest they are dangerous and negligent parents. Contrary to the stereotype of the ‘deadbeat Black dad,’ Black fathers love their children so much that they are willing to do anything to support them.”

Clinton shared his travails and that made him more effective with the dads. “Some of their experiences as parents were also part of my journey as a Black father,” he says. “When the time was right, I would tell them my personal story as a young, struggling father. After sharing, they would know they were not alone in their feelings. ”

Home visiting and parent education programs can help, Clinton explains. “We need to ensure they are father friendly, father-centered and culturally relevant. All fathers want what is best for their children, and well-designed home visiting programs can support fathers in their role as caregivers and nurturers to their children.”

One of the ways he helped these dads was by urging them to expand their concept of what it means to be a father and see that it goes beyond bringing home the bacon. “As a young father, I always felt the pressure of being a breadwinner, but I wasn’t old enough to have a job,” he told the dads. “For the longest time, the only thing I had to give my daughter was quality time, and many of the fathers I worked with faced the same dilemma. So, I told them to recalibrate their thinking and understand that being a father is not just about being a financial provider. It’s also about being an emotional provider. The thing that children will value, in the end, isn’t what their fathers bought them—but the quality time that they spent with them.”

Those hours are priceless, as Clinton is reminded now that he’s become a dad for the second time. He spends a lot of time playing with his toddler and enjoys exploring the world along with him. He also enjoys earning a salary as a postdoc after being in school for most of his life. “I can finally provide both quality time and financial resources,” he says, “and that makes parenting a lot easier than it was in the past.”

Now he looks forward to continuing to remove barriers for other Black fathers as he moves into a new position. “This September,” he says, “I’m stepping in as president and CEO of Fathers, Families & Healthy Communities (FFHC), a Chicago-based organization that works to ensure Black fathers are valued as assets to their children, families, and communities. Part of my plan for the organization is to take research and use it to reimagine FFHC’s programmatic approach to serving fathers. I also plan to work alongside Black fathers to advocate for transformational policies that benefit them, their families, and their communities.”

As an organization, FFHC believes “the possibilities, potential and power of fathers are enormous.” And Clinton has seen how true this is despite public dialogue that denigrates Black dads. At the helm of FFHC, he will fight for policies that benefit Black fathers and parent education programs that benefit their children. “Supporting Black fathers is an investment in our children and our communities,” he says, “so we must change the narrative that dismisses Black dads as inconsequential parents.” That’s the key to his professional mission, based on a core belief: “We must empower Black fathers to be better providers, better protectors, better parents, and better advocates for themselves.”