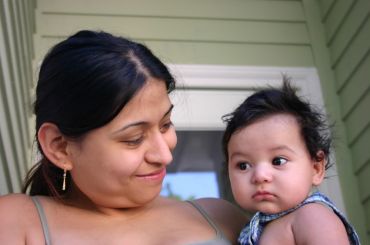 A very tired mother brought her 4 month old daughter to a day care center telling her teacher, “She was up all night crying. I wanted to go get her but my husband said I’m spoiling her and she will never sleep through the night if I do. It’s so hard sometimes to know what is best.”

What should this mother have done? How should the teacher have responded? Is picking up a screaming baby spoiling the child? The answer is – it depends. It depends on whom you are asking this question. In the U.S., but not in all cultures, many parents worry that responding to a child’s needs means they will grow up to be dependent, self-indulged and manipulative brats – and no parent wants that for their child. In fact, infants and toddlers have only one way to communicate – by crying. That’s it. That is their only language. That is the way they tell you when their bellies ache with hunger, their ear throbs with infection or their gums swell with a budding tooth. It’s also how they tell you if they want to be held, if they are cold, or bored. And therein lies the problem. Since you don’t know what exactly they want when they cry, how do you know when to respond and when not to? Aren’t all their needs important, at least to them?

What the experts agree on is that young children’s brains are not capable of manipulating adults. Their brains are just not that sophisticated yet. This ability is developed much later, and is really explored in teenage years. So, if they aren’t staying up at night scheming as to how to get us to spoil them, what’s all that racket in their crib? Again, they are asking for their needs to be met. The challenge is that they have many of needs and their needs don’t typically follow our sleep/wake cycle, making the whole scenario exhausting to deal with. But despite the sleepless nights, if you can realize that a secure baby, whose needs are met, is calmer and more responsive himself, then maybe a couple of years of sleeplessness is not such a bad trade off.

Spoiling a child by responding to them when they cry is a myth. Addressing baby’s needs builds trust and attachment between caregiver and a baby. As early childhood professionals, it is our job to help educate parents and others who care for children and to put the spoiling myth to bed for good.

Should Teachers Talk About COVID? Lessons From the Past

Teachers aren’t keen to bring up the topic of COVID, according to their Facebook posts. “I don’t think we are allowed to,” one teacher wrote. “There’s no way I’m going near that subject since it’s...