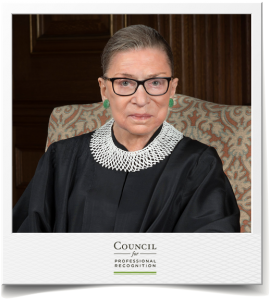 “One of my fondest memories growing up was sitting on my mother’s lap while she would read to me,” Ruth Bader Ginsburg told a group of families in Santa Fe, NM, a few years back. Justice Ginsburg had come to United Way of Santa Fe County to talk about how early learning programs help young children reach their dreams and empower moms to stay in the workforce. While there, she also read a picture book called Go West to the kids. Ginsburg’s “very favorite part” of the book, she told the children, describes big clouds and a bigger sky. “Every time I leave Santa Fe to go east, I miss my big sky.”

Ginsburg loved that spacious star-filled sky so much that she visited Santa Fe every summer. While there she attended the Santa Fe Opera season, spoke at symposiums, visited museums, bought pieces from local artists and visited friends. One of them was my mom, Winnie Klotz. As staff photographer at the Metropolitan Opera in Manhattan for 30 years, she photographed all the opera greats and had hundreds of pictures published in national papers like the Washington Post and New York Times.

She and Ginsburg met at a party over 12 years ago and quickly became “pals,” my mom says, “since we had a lot in common.” They were both Jewish women of almost the same age. They both came from New York, had been married to lawyers and shared a grand passion for the opera. Each year when Ginsburg was in Santa Fe, she spent as much time with my mom as she possibly could: coming to her home and taking her to the conferences where she appeared. “We had an especially good time when we’d go out for coffee and gossip about the opera singers,” my mom recalls. And in time they made a pact. “We agreed that on our hundredth birthday, we would go to the Metropolitan Opera and have Placido Domingo sing Happy Birthday to us from the stage.” 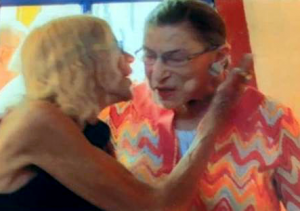 Ginsburg longed to become a singer like Domingo, but something happened in grade school that squelched her dream. “A music teacher divided the class into two groups,” she told my mom. “On one side of the room were the robins who sang, and on the other side were the sparrows who just mouthed the words. I was a sparrow.” But this early failure didn’t stop her from flying high in a career that forged greater equity for all. “I try to teach through my opinions, through my speeches,” she once explained, “how wrong it is to judge people on the basis of what they look like, color of their skin, whether they’re men or women.”

Her trailblazing commitment to justice and human rights turned her into an icon. But before she became known as the Notorious RBG, Ginsburg was a working mom. The challenge of raising her kids while pursuing a high-pressure career convinced her that dads must bear an equal weight as parents. “Women will have achieved true equality,” she said, “when men share with them the responsibility of bringing up the next generation.”

Ginsburg’s husband, Marty, supported her, but schools hadn’t yet gotten the message when their two children were young. Her son, James, was a “mischievous child,” as she told my mom, and she would often get calls from his school. Finally, she told the school, “This child has two parents, please alternate calls.” Marty’s turn came after James took a group of friends on a lengthy elevator ride at school. When Marty arrived there, he learned that “James had stolen the elevator.” His response was, “How far did he take it?”

After this rejoinder, the school seldom called again, and James got over his capers to become a successful classical record producer. Ginsburg was very interested in her son’s work and wished that all young children could be exposed to classical music—especially opera—at a young age. Ginsburg knew that the early years, when kids’ minds are most open, are the best time to spark creativity and interest in the arts, as my mom recalls. “She once told me, ‘Winnie, you have to get to them when they’re young, before they learn they’re not supposed to like opera.’”

And my mom actually did because she used to give kid-friendly talks on opera to children who were bussed to the opera house from low-income, outer boroughs of New York. She knew how to get across to the children as she showed them slides and turned the stories of the great operas into fairytales that caught the kids’ attention. “The children loved it and one time after I finished, a little boy asked, ‘Can you do it again?’” my mom recalls. “When I told Ruth about the talks, she said, ‘Winnie, that’s the most important thing you’ve done in your life.’”

Ginsburg also admired my mom for having a career while raising three daughters (and tending to a traditional husband who didn’t help with parenting too much). She was eager to know my sisters and me, and I often chatted with her when I went to opera performances in DC. A few years ago, she even arranged for me and my dear friend, Ken, to come and hear oral arguments at the Supreme Court. We watched and listened as she and her colleagues proceeded into the courtroom in their black robes, sat way up on a dais like demigods of the law and presided over a case on Native American rights.

Once the arguments concluded, she invited us to visit her in her chambers. After making our way through a maze of security checks, we reached her spacious office, filled with books on opera and photos of the great singers who were her friends. During the visit, we discussed my mom and dished the dirt about an opera star who’d been booed off the stage and had tomatoes hurled in his face. When I said goodbye and shook her hand, it felt small and frail.

Ginsburg’s health was failing in recent years, as she sometimes admitted to my mom in the handwritten letters that they exchanged several times a month. “She was always optimistic and resolved to carry on,” my mom explains. “But I knew the end was near after reading her final letter a few weeks ago. When she told me that she was holding off cancer and suffering from chronic fatigue, I reminded her of our pact,” my mom says. “You made me a promise, and a woman of your integrity shouldn’t break a promise.” But she did.

Ginsburg and my mother won’t get to mark their hundredth birthday together, and my mom will miss her friend. They won’t get to gossip and enjoy the opera together because Ginsburg will never go west again. But perhaps she’s still watching the stage from her balcony in the big sky. I can only pray she went there in peace. And we should sing her praises for years to come since she strived to improve life for all. She was one of our country’s shining stars.