April Woodard: Thoughts on Service and the CDA

Home > Newsletters > April Woodard: Thoughts on Service and the CDA 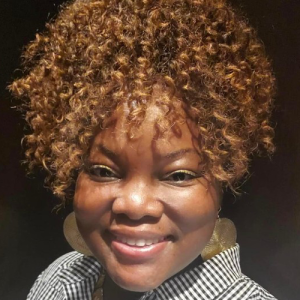 April is a servant leader who’s brought her sense of mission to the early childhood field since she was a teen. She found her vocation by watching her mom, who worked as a Head Start teacher and then a director in Washington, DC. “I pretty much followed in her footsteps,” April says, “and when I was 14, I worked with children at a summer youth program she was overseeing. That was 36 years ago and I’m still in love with early learning,” she explains.

April spent 15 of those years in the early childhood classroom after graduating from Delaware State University in Dover, the same school that her mom attended. During that long span of time, her passion for teaching grew as she watched children learn concepts in the classroom and then apply them to real life. “I would talk to the children about wheels, for instance,” she says, “and the next day, they would come back and tell me, ‘I saw a bus with wheels, a bicycle with wheels and a car with wheels. There are so many wheels in the world!’”

And there were so many other things April remembers imparting to the children, including language skills and public speaking—an art at which a little girl named Dakota would go on to excel. “I taught her after moving to Clayton County, Georgia, about 15 years ago, and I still remember coaching her on how to stand and how to look at the class when she gave a speech,” April says. And the lessons apparently stuck, as April saw when she ran into Dakota some years later. “At the time, Dakota was about 12, and she had been chosen to represent her middle school at an event for the Clayton County Public Schools. The superintendent of schools was there, and I was so proud as I watched Dakota make a beautiful speech before him and a large crowd. And when we talked, Dakota told me that she remembered just how I encouraged and pushed her.”

By the time of this reunion in 2012, April was passing on her knowledge of ECE to high school students at Perry Career Academy in Clayton County, where she worked until this past summer. “I wrote a grant to bring the Child Development Associate® (CDA) Credential™ to Perry and even succeeded in getting the county to pay for the cost of the students’ CDA exams,” April says. “That benefit attracted students from all over the county, who came to take CDA classes at Perry.” It also helped that April believed firmly in the value of the credential and earned one herself though she already had a college degree.

“Gaining a CDA,” she says, “helped me be a better teacher for my high school students. I felt more professional after getting a credential that was customized to teaching our youngest learners. Besides that, having a CDA put me in touch with what my high schoolers needed to write their competency standards, put together their resource file and fulfill the other requirements of the credential. And it made students less anxious about the CDA process since they knew I had gone through it, too.”

It does take confidence to get through the classes, observations and exams, April admits. So, she did a lot of one-on-ones with the students she thought needed some extra support if they were to succeed. “It’s just like being a mom and having children,” she explains. “You know which of them will be okay on their own and which ones need more help.”

Then there are the ones no one expects much of, and that included a special needs student who enrolled in the CDA program at Perry. “Nobody thought she would be able to get her CDA,” April says. “Still, I spent a lot of time with her going over early childhood theories, different issues in the classroom and test questions for the CDA exam. She was able to pass and is now working as an assistant teacher. I think my assistance made a difference. But I believe what really mattered was her own drive to succeed and desire to work with young children.”

April knew how to bring out the best in her high school students and sometimes that even meant getting a bit silly, as she admits. “I modeled what they should do with children by singing songs with the students every morning. We did the cha-cha, the two-step and the Sid Shuffle, a dance from the kids’ movie Ice Age: Continental Drift. Sometimes, the high schoolers looked at me as if I were crazy, but then when I went to observe them in preschools, they were singing the songs and doing the dances we did in class. My students called me the child whisper when they realized that what I taught them really worked.”

The students took it to the child care centers where they gained the experience needed before being assessed in a child care setting. And April tried to make the assessment go smoothly by getting a clear idea of what CDA Professional Development Specialists were looking for. “I became a PD Specialist, so I was able to look at CDA candidates from both sides of the fence,” April says. “It was also a way to help folks besides my students to earn their CDA, especially since there aren’t a lot of PD Specialists in Clayton County.”

Another way April served the broader ECE community was by volunteering with the Georgia Association of Teachers of Family and Consumer Sciences. “I was the vice president for my region of Georgia and worked with teachers on some of the issues that concerned them, including assistance with certification, professional development, getting background checks for students to do internships, and how to help more people earn a CDA.”

She also provides her expertise as a member of the CDA Advisory Committee at the Council, where she recently worked on ways to keep teachers safe during COVID and help them keep young children safe, too. “I joined the committee,” she says, “because I like helping others in my field. It was also a way to know what’s going on with the profession, so I could keep my high school students in the know.” And April has first-hand knowledge of the challenges teachers face since she’s served for years as a consultant who provides CDA training to child care centers throughout the East Coast.

She’s now doing that when she’s not working at a new full-time job. “I was promoted this summer, and now I’m a professional school counselor at Kemp Primary School in Hampton, Georgia, where I address young children’s social and emotional needs,” April says. Much as she loved teaching the high school students, she missed working directly with young learners. And this new role lets April connect with folks at a deeper level. “Counseling is my true passion,” she says. “I always counseled my students, whether at preschools or at Perry. Now I can touch a broader group of children and parents than I ever could in the classroom,” April explains. And she brings a lot of her own heart and soul to this work.

Your personal values and views shape your approach to education, April believes, and she’s exploring the relation as she pursues a long-held goal. “I want to add a spiritual component to my work and become a Christian counselor,” April explains. “So, I’ve been working toward a Ph.D. in theology for some years. But it’s been hard to finish since life and work have interfered.” Still, April is determined to achieve this dream as she explores new paths to shepherd families and children through life. “I know I can conquer any challenge, no matter what,” April explains. And she draws her faith in a brighter future from the Bible verse, “I can do all things through Christ who strengthens me.” They’re words that describe the role of the ultimate servant leader. And April has followed in his footsteps through her tireless work in teaching.