Maria Fátima Castro: A Passion for Literature and Learning 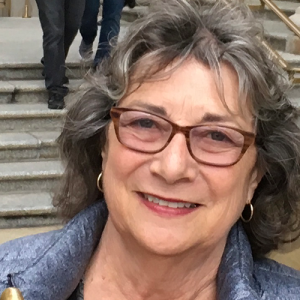 Literature was Maria Castro’s first love. “When I was growing up in the sixties,” she recalls, “teaching was one of the customary options for women, and I wanted to do something different. So, I went on to study English in college and planned to work for a newspaper after graduation.” Yet, early education was in her blood. Her mother was a Portuguese immigrant who taught severely disabled children in the Santa Cruz mountains of California. “I assisted her with the children after my classes ended when I was in grade school and high school,” Maria says. And the experience would one day lead her to discover the second love of her life. As the director of Central California Migrant Head Start, she now trains immigrant women to be early childhood teachers.

She fell into the early childhood field after finishing college and moving back to Santa Cruz County. “When I couldn’t find full-time work on a newspaper,” she recalls, “someone suggested I take advantage of all the volunteer work I’d done with my mom and apply to be a teacher’s assistant at a local preschool. It was a practical decision, but I wound up finding out that I really enjoyed it.”

So, Maria stuck with the field, taking classes in ECE at a local community college and earning her teacher’s permit. “After nine years as a preschool teacher and Head Start home visitor, I was totally committed to the field,” she says. “I went on to get my master’s degree in education and wrote a thesis on dual-language learners”—a course of study that would stand her in good stead as her work began to focus on the Latino residents of her community. “By the mid-1980s, I was a child development instructor at Cabrillo College and a Child Development Associate® (CDA) advisor for Migrant Head Start—roles that made me realize I wanted to work with adults so they could do a better job teaching children.”

Her big chance came in 1995 when the state of California provided a grant to increase the number of child care providers in Santa Cruz County. “There were very few of them in the county at that time and only two who spoke Spanish, though much of the local population was Latino,” she recalls. “The state wanted to fill the gap and organize workshops to help folks get the training they needed to become child care providers.” So, she set up a series of workshops taught in Spanish. “These workshops allowed Spanish speakers, many of them field workers, to get their family child care licenses. Many went on to get their CDA—a practical tool that really shows you what you need to do in a child care setting.”

Soon Maria wanted to open even more doors for these providers, so she came up with the idea of adding some college units to her program. “I wanted folks to realize they could be college students and take classes at Cabrillo College,” she says. “So, I began putting up flyers about the opportunity at grocery stores and laundromats. The response was tremendous, and we went from two students to 60 in a couple of years. Eventually, the college developed a complete program in Spanish that would lead to an associate degree in early childhood education.” The decision was controversial at the time because most professors were used to teaching only in English.

“There were also questions about our decision to pioneer a network of family child care homes for Migrant Head Start,” she recalls. “At that time, Migrant Head Start programs typically used a center-based model, but it was really hard to find affordable places for centers in Santa Cruz County.” Using a home-based model was a practical decision, but it turned out to be a plus. “In the Latino community,” as she explains, “the family child care home is perceived to be more natural and more nurturing. Parents liked the fact that their children stayed with the same caregiver all day, which is not the case in centers, and that siblings of different ages could be in the same room. So, we quickly realized that we’re not doing this because we’re desperate, we’re doing this because it works!”

It helped that the family child care providers she trained and still oversees tend to be extremely hardworking. She’s worked with some of her providers for decades, and she’s well acquainted with their life stories. “Many of them,” she says, “had been teachers in Mexico but couldn’t speak English and ended up working in the fields out of desperation. After doing that grueling work, the long days demanded of family home care providers didn’t faze them. “I remember asking one provider, ‘How do you do it: be here for the children at 6 am and work with them until 6 pm, clean up the whole place for the next day—then do all the piles of paperwork that’s required?’ In response she just laughed and said, ‘After you’ve worked in the fields picking strawberries all day, this is much easier and so much more rewarding.'”

There’s also a lot of room for growth, as Maria has seen during her decades in the early childhood field. “One of the providers I worked with came here with a degree and wound up working in the fields. She became a teacher’s assistant, earned her CDA with my support and became a preschool teacher. Now she’s the director of a program that serves over 800 children. Similarly, I have two colleagues who worked in the fields and now are program coordinators who’ve earned their master’s degree.”

Maria’s success in inspiring educators to strive partly stems from her ability to identify with their belief systems and their values. “I’m the child of an immigrant teacher,” she says, “and I spent several years in Portugal as a child, an experience that has helped me interpret mainstream American culture for new arrivals. I see myself as a cultural bridge who can translate ideas, philosophies and behavior in the U.S. I feel like I’m sort of an ambassador and that’s very satisfying for me.”

She also loves bringing people into a field where there’s so much variety and so many chances for self-expression—especially when you’re a family child care provider. “If you’re someone who’s artistic or musical, you can use art and music to make your child care home unique,” she explains. “If you like nature, being outdoors and gardening, you can put a focus on that. So, you can fill your child care home with your personality and your passions,” she says. And her providers are eager to do that because “these are energetic folks who are constantly searching for new ideas.”

Maria has a lot of energy, too, and she’s always thinking up new ways to train providers and support the 30 she sees during her visits to their homes. She’s now looking for new children’s books so they can teach children the importance of diversity and inclusion. “In the past I focused on books that showed Latino children in a positive way,” she explains, “but I’m branching out to recommend books that show Latino and Black children playing together.” So, she’s bringing her first love for literature and books to her work in helping young children learn.

Maria’s own background has made her an avid reader who goes to Jane Austen conferences each year. But she doesn’t regret falling into the early childhood field. “I’m doing something that is creative,” she says. “I love the variety because I get to teach, visit family child care homes and implement new ideas for training. Most of all, I never have to wonder if what I do matters. Keeping children safe, healthy and learning is one of the most important things you can do.”