Puhala Kamalamalama: Looking Back to Look Ahead

Home > Newsletters > Puhala Kamalamalama: Looking Back to Look Ahead 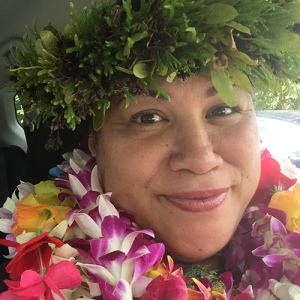 Puhala grew up on a farm in Hawaii where she helped her parents care for the land. The family didn’t have much, not even running water, and Puhala faced bias because of her brown skin and curly hair. They marked her as Native Hawaiian in a state that still contends with the burden of a post-colonial past that led to impoverishment of native people. “I was bullied at school,” she says, “and no one expected me to do much besides work at McDonald’s or Target. Yet growing up on that farm taught me the value of hard work, perseverance and cultural pride. I always thought about how I could contribute to my community and its children,” Puhala recalls. And she thought she’d found a way to do so when she was five years old. “A dentist came to my kindergarten class to distribute free toothbrushes and toothpaste to the children. And watching him made me dream of becoming a dentist. I thought this is what I should do to help little kids.”

Puhala came close to reaching her career goal while attending dental school in Texas, but her path changed during a visit home nearly 20 years ago. “My father had cancer and was going through chemo,” she recalls, “so I decided to stay in Hawaii and help my mom with the farm. I was doing that while working as a porter at the airport when the chance to enter the early childhood field came knocking at my door. A distant cousin of mine, who worked as a teacher’s aide, suggested I join her at INPEACE, a nonprofit that provides Native Hawaiian families with educational programs.”

In 2007, Puhala succeeded in getting a job as a teacher’s aide at Keiki Steps, an INPEACE program that provides Hawaiian culture-based family-child interactive learning for parents with children ages birth to five. “I wasn’t sure what to expect,” she admits, “since the only experience I had in education was volunteering with older children at my church. But once I stepped into the early childhood classroom, everything came naturally, and I simply fell in love with the field.”

Puhala knew she needed to gain knowledge to serve the families better, and that meant starting her education all over. In 2014, she began taking classes in ECE at the local community college, earned her bachelor’s degree in 2018 and last year, earned her master’s degree in education curriculum and instruction. Along the way, she has advanced from a teacher’s aide to child advocate before assuming her current role as Keiki Steps site coordinator for Hawaii. In her drive to succeed, she drew strength from the Polynesian phrase “un nivel mas alto”—meaning rise to a higher level. And it’s also her motto for the families and children she serves.

As site coordinator, Puhala fills a wide range of roles to advance high-quality early education. She directs the activities of educators and administrators at child care centers, plans activities and educational content, determines allocation of funds, partners with community colleges to host ECE students on site, and conducts workshops for ECE conferences in Hawaii and other places with indigenous populations. Most important of all, she confers with parents to assist them in helping their children develop and grow. “Keiki Steps empowers parents,” Puhala points out, “because we know that parents are their children’s first teachers.”

That’s the basis for the family interactive model they use at Keiki Steps, Puhala explains. “The program requires parents, another family member or caregiver to register with the child. Then they come in with the child, sign in with the child and join in activities with the child, including a circle time where kids sit on the adults’ laps. We also get families engaged by writing weekly parent blogs, giving them a mini professional development series and connecting them with any community resources they might need. We also hold weekly chats where parents can share their concerns—anything from behavioral problems to food insecurity and potty training. So, there’s a wide range of activities that empower parents and help ensure steady enrollment in the program. “We don’t have any trouble getting more parents involved since families learn about the program through word of mouth or what we like to call the coconut wireless,” Puhala explains.

The coconut tree has long played a role in traditional Hawaiian culture by providing nourishment and material for food containers, tools and children’s toys. It also plays a role in how Hawaiians talk about their past. The early Polynesian voyagers sailed a long way before they found the shores of Hawaii. They were a migrating folk, yet nostalgic for their old home. And the coconut tree stretching into the sky, flexible but strong, served as a powerful symbol of their Polynesian roots.

Now Keiki Steps is working to connect families and children to their traditions. Many native practices faded away after Hawaii became a U.S. territory in 1900 and then a state in 1959. These developments brought in an influx of other groups—Japanese, Chinese and Caucasian—who looked down on Native Hawaiians, forbade them to publish in their native language and banned its use in schools. “Our language and traditions were stripped from us,” Puhala says, “and we were consumed by a culture that wasn’t ours. Generations of Hawaiians lost all ties to their roots until the 1980s when there was a focused push to revive the past.” And it plays a central role at Keiki Steps, where they believe in embracing the past to enhance the future for young children.

“You can’t feel grounded in the present or prepare for the future,” Puhala says, “unless you understand your past. So, we integrate Hawaiian culture and language into everything we do. For example, in the morning, we do greetings and simple chants to honor our ancestors and greet the day with positive feelings. We also chat about how we can make all children feel valued and look ahead to productive lives in which they feel a sense of duty to their families and community, instead of just thinking about themselves.”

The educators at Keiki Steps are committed to conveying this message, and Puhala guides them by bringing in a cultural specialist for monthly staff development meetings. “She teaches us cultural practices and ways to blend them into our curriculum,” she says. “We also work with programs in Canada and the U.S. that serve indigenous people. For example, we’ve been active with the University of Arizona, where they’re working to set up a culturally aware program for Native American children in schools. We’ve seen that it’s not just in Hawaii that we’re trying to revive our native culture. We’ve learned that other indigenous cultures face the same challenge since parents often feel that raising children in the native culture would impede their progress in school. So, we’re all still learning how to help children look back to better look ahead,” Puhala says.

And she’s had insights into her own past since earning her master’s degree last year. “Despite my degrees and achievements, I didn’t feel at ease being Hawaiian,” she admits. “I was still ashamed of my brown skin, curly hair and other qualities that made me who I am. Then I went home to the farm, and for the first time, I felt grounded and Hawaiian. I wept as I realized that what mattered to me most was right here on that farm. My value wasn’t in my wonderful school transcripts. It was in the wisdom of my forbearers and the sense of commitment to others I’ve felt since I was five years old,” Puhala says. She never attained that long-ago goal of helping children as a dentist but working at INPEACE has given her a sense of peace. She has fulfilled her early dream by helping Hawaiian children feel proud of who they are.