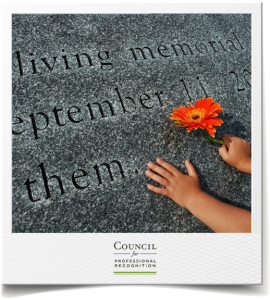 The morning sun lit a clear, blue sky as America started its day. Highways filled with traffic and railroads rumbled with trains. Planes soared into that cloudless sky, two from Boston, one from Newark and one from Washington, DC. The passengers included 19 men who had pledged their lives to harm our nation, and on September 11, 2001, they acted on that threat. One plane hit the Pentagon in Arlington, Virginia. Another crashed into a field in Western Pennsylvania. And two slammed into the Twin Towers at the World Trade Center, leading both buildings to collapse. As smoke filled the air, debris rained on people’s heads and blood-curdling screams rang out. Soon scores of police officers, firefighters, Red Cross workers and volunteers rushed to the scene, where they risked their lives to take people to safety.

Americans of all ages struggled to make sense of what happened as visions of terror filled the news. Folks needed words of hope, and they got them from a TV icon who spent decades singing “Won’t you be my neighbor?” Mr. Rogers was shaken by the attacks since they went against the message of kindness and love he’d spent decades passing on until his last show the prior year. So, he came out of retirement and made four PSAs to guide parents and children through the traumatic events.

In the first, he shared wonderful words of comfort that had guided him since he was young. “When I was a boy and I would see scary things in the news,” he recalled, “my mother would say, ‘Look for the helpers. You will always find people helping.’ To this day, especially in times of disaster, I always remember my mother’s words, and I am always comforted by realizing, there are so many caring people in the world.”

Those helpers included the early childhood teachers who worked at the Discovery Day Care Center, a small building across the street from the Twin Towers. “Our day care was glass from ceiling to floor,” recalled Karen Caycedo, one of the teachers who worked at the center. “All I could see was just debris and earth, and it felt like we were about to be swallowed.” So, she and the other teachers sprang into action, scooped up the children and scuttled frantically out.

“We just ran,” Caycedo said, as each teacher held two babies and the older children held on. The teachers found three shopping carts along the way to ferry the kids, and the youngsters “thought it was a jolly ride,” as Caycedo recalled. After four hours of winding through the streets of Lower Manhattan, they stumbled into a Head Start center, where the anxious waiting began. Caycedo and her colleagues knew that some of the parents worked at the World Trade Center and might never reclaim their children. But the teachers were prepared to step in. “All I was thinking was ‘we’ll take those babies in,’” Caycedo said. “That’s it, whether we could or not. Those were our babies. There was no way they would ever become orphans.”

As it turned out, none of the children did become orphans. The teachers put out the word out to the media and police that the children were at the Head Start center. And by midday, all the parents arrived—many panting and covered in dust—to find their children peacefully taking naps. So, this story has a very happy ending. But the legacy of 9/11 lives on.

Those of us who experienced that day remember where we were when we got the news, what we did, how we felt. And we know the impact of the attacks goes far beyond the thousands of tragic deaths that took place. The attacks have far-reaching results ranging from increased airport security to discrimination against Muslims and Arab-Americans to the wars in Afghanistan and Iraq in which hundreds of thousands also died. In short, the 9/11 attacks changed the course of history in our country and around the world.

Memories of 9/11 will come back this year as we mark the 20th anniversary of the attacks, a day that may expose young children to things they won’t understand. They may see ceremonies on TV or watch them on their computers. And they may hear the grownups talking about what took place. When they do, children might be confused and think those horrors are happening right now. So, educators should be ready to help them gain a grasp of the event and exactly what it means.

Bringing up 9/11 in a pre-K classroom could make teachers feel anxious since they typically want to shield children from tragedy and trauma. Yet it is important to talk to children about 9/11 since the media still provides heavy coverage of that day. Sooner or later children will hear something about it, and many young learners don’t yet know how to distinguish what they’re watching from what’s real, what took place in the past from what’s happening in the present. If they try to fill in the blanks, they could wind up thinking there’s still something to be scared of—or that they and the people they love are under attack.

You can ease their fears by first finding out what they know and clearing up any misconceptions. Then keep it simple and stick to the basics. For example, you might say, “September 11 was the day when airplanes crashed into tall buildings called the Twin Towers and lots of people got hurt.” Don’t use unfamiliar phrases like terrorist groups or massive explosions. Focus on answering their questions. And make sure they understand the meaning behind your words. It’s also important to counter any bias against Muslims and Arab-Americans, a problem that endured when the attacks were long in the past. So, you might explain what happened by saying something like “The attacks happened because some people were angry at our nation.”

Teachers who broach the subject the right way can make a positive impact, recalled a young man as he looked back on his childhood in the days after the attacks. “Kids were constantly being told who the bad guys were and what they looked like,” he said. “It was almost like watching a cartoon, being told who the villain is—and that the villain could be anywhere, like on the subway holding a backpack or in a crowded store. But fortunately, I had a wonderful teacher who taught us that one small group of people does not represent an entire race or religion, that those people who chose to do something horrible were not doing it in the name of any or all of them. People of all races, religions and walks of life have the ability to do bad things and good things, too.”

As early childhood teachers work to get this message across, they can find some guidance in the Council’s Essentials for Working with Young Children. “Your goal as an educator is to help children learn tolerance and acceptance of people of different races, cultures and identities,” the Essentials points out. So, ask yourself the following questions: “Does each child in your class identify with the learning environment? Do the children see themselves and their families represented throughout the setting and throughout the day? And do you have strategies for speaking with children who may inadvertently make inappropriate comments?”

It’s important to keep it simple, as Sesame Street did in the wake of the 9/11 attacks. At the time, people were used to the characters on Sesame Street living together with tolerance and respect. So, they were surprised at an episode when Big Bird had a visit from his pen pal, Gulliver, a seagull who lived far away. When Gulliver arrived on Sesame Street, Snuffy wanted to play with him. But Gulliver told Bird and Snuffy that he only played with birds. In response, Big Bird said, “If you won’t play with Snuffy, we won’t play with you.” And that was the point Sesame Street wanted to make, said Lewis Bernstein, the show’s executive VP of education and research. “It was a line that we really wanted to drive home because it addressed the idea of standing up to intolerance. Even as a preschooler you can take a stand about what’s fair.”

This message still resounds 20 years after the 9/11 attacks, and early childhood teachers can be among the helpers who get it across. As we seek to guide young children, we should remember what Mr. Rogers said a year after 9/11 and two months before he died. Despite his lasting sense of grief, he hadn’t lost faith in the power of kindness and love, as he explained in a final PSA. “We’ve seen what some people do when they don’t know anything else to do with their anger. I’m convinced that when we help our children find healthy ways of dealing with their feelings, ways that don’t hurt them or anyone else, we’re helping to make our world a better, safer place.” We need to keep telling our children, as Rogers did, that we can all be neighbors.