Published by CounciLINK on February 28, 2019 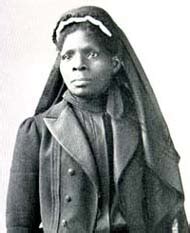 As part of the Council’s celebration of Black History Month, we honor the contributions of Susie Baker King Taylor, the first African American to openly teach in a school for former slaves in Georgia.

The author of Reminiscences of My Life in Camp with the 33d United States Colored Troops, Late 1st S.C. Volunteers, she was the only African American woman to publish a memoir of her wartime experiences.

Susie Baker, the daughter of slaves, was born in Liberty County, GA, on August 6, 1848. When she was about 7 years old, her owner allowed her to go to Savannah to live with her grandmother. Despite Georgia’s harsh laws against the formal education of African Americans, she attended two secret schools taught by black women. From them she gained the rudiments of literacy, then extended her education with the help of two white youths, both of whom knowingly violated law and custom.

In April 1862, Baker and many other African Americans fled to St. Simons Island, GA, occupied at the time by Union forces. Within days, her educational advantages came to the attention of Army officers, who offered to obtain books for her if she would organize a school.

She soon would be become the first black teacher for freed African American students to work in a freely operating freedmen’s school in Georgia. She taught 40 children in day school and “a number of adults who came to me nights, all of them so eager to learn to read, to read above anything else.” She taught there until October 1862, when the island was evacuated.

While at the school on St. Simons Island, Baker married Edward King, a black noncommissioned officer in the Union forces. For three years, she moved with her husband’s and brothers’ regiment, serving as nurse and laundress, and teaching many of the black soldiers to read and write during their off-duty hours.

In 1866, she and Edward returned to Savannah, where she established a school for the freed children. Edward King died in September 1866, a few months before the birth of their first child.

In 1867, she returned to her native Liberty County to establish another school. In 1868, she again relocated to Savannah, where she continued teaching freedmen for another year and supported herself through small tuition charges, never receiving aid from the Northern freedmen’s aid organizations.

In the 1870s, King traveled to Boston as a domestic servant of a wealthy white family. While there she met and married Russell Taylor. She remained in Boston for the rest of her life, returning to the South only occasionally.

After a trip to Louisiana in the 1890s to care for a dying son, she wrote her Reminiscences, which were privately published in 1902.