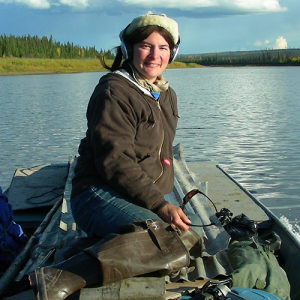 Gina Pope ventures boldly to places where most of us wouldn’t dare go. Her idea of a good time is to set off for the wilderness of Alaska and stay there for weeks at a time. She and her partner spend three days boating and camping along a river to reach their cabin in the woods. Once arrived, they spend their days hunting moose and trekking through the pristine woods where Gina spent her youth.

She brings this same sense of adventure to her work as a coordinator and developmental specialist for the Tanana Chiefs Conference Infant Learning Program in Fairbanks. “I travel great distances,” she says, “and get on small planes to serve a rural region of Alaska that’s about 400 by 600 square miles. The Alaskan Native families I serve have children under three with a medical condition or marked developmental delay. My team members and I provide the children with the occupational therapy, physical therapy and psychological services they need. We also work with parents on finding the best ways to help their children advance and grow.”

It’s important to partner with the parents, Gina points out, because she can only visit each family four times a year since it takes a long time—often as much as a day—to reach the remote villages where they live. “When I leave,” she says, “we keep in touch by phone, Skype or Zoom, but the families’ lives go on the way they always have. “My visit only lasts a few hours, and when I get back on the plane, boat or snowmobile, the family is still there carrying on the day-and-night business of raising a child.”

And the families have different approaches toward the challenge of raising a child with special needs, as Gina has seen. “Some families are convinced the child will outgrow the difficulties they face. Others are concerned about having their child talk, read and interact with others. And they decide right away that the child will need services in the long run, especially if there’s a diagnosed medical condition. The families I work with are so diverse that I must pay close attention to how they view the child. How I interact with a family affects what activities they engage in and whether they are receptive to my suggestions. In many cases, the children I serve grow up to blend into the community where they live, be accepted and do all the traditional tasks that come with living in a rural village.”

Part of Gina’s success with kids comes from her gift for connecting with families. The parents like the way she plays with the children, encourages learning, and gives them insight into their child’s behavior, she explains. It also helps that Gina is an Alaskan Native and knows about her people’s strengths and way of life “Packing water, obtaining seasonal food from the river or wild, and keeping a vegetable garden consume much of their day. But they also make time for village events like fiddle dancing, a type of square dancing that Gina also loves. “I know the rhythm of rural life because I grew up in a village much like those where these families live.” That’s where her career working with families and children began over three decades ago.

“There was an opening for a tribal villages service worker, and it gave her the opportunity to do home visits and provide counseling for parents of children from birth to five years of age. “While I was doing the visits, I learned about the CDA® and earned my credential in 1994,” she recalls. It was an achievement that would inspire her to go on for her bachelor’s degree and master’s in early childhood education. “I wanted to understand more about what happens in early childhood, know how to help children excel and guide parents in seeing the world through the eyes of their child.”

She went on to use her knowledge after moving to Dillingham, a fishing port in Alaska, and working for Head Start. She would proceed to become a Head Start director, early intervention teacher and college instructor before taking on her current job. She also serves as a PD Specialist for the Council, a role that gives her the chance to see more of her large and diverse state. “I have to be creative to get to the far-flung places where candidates need the services I provide,” she explains. So, she’s travelled by snowmobile and boat, traversed rivers and rough, frozen terrain.

She does it because she knows how much the CDA matters. “The CDA helps candidates think about what they are doing and exposes them to the key theories of early childhood practice. It also makes them see the major impact that early learning makes on the rest of people’s lives,” she says. And earning her own CDA led Gina to make professional development a goal for herself and other folks.

She helps to bring out the candidates’ best by doing assessments in their native tongues, including Inuit and Yup’ik. “Though most of the candidates know English,” she explains, “they’re more at ease when the PD Specialist speaks the language they grew up with and the one they use in the classroom,” especially now that language immersion programs are becoming more common. There’s an ongoing effort to revive indigenous tongues as part of a campaign to keep Alaska’s native culture alive, despite the ravages on it that time has wreaked.

“The decline of native culture has a long history that goes back to the westernization of Alaska,” she explains. “Children were taken from their homes and sent to boarding schools where they would absorb the dominant culture. Alaskan Natives were barred from entering many buildings, and they weren’t allowed to use the languages they spoke at home.” Yet Alaskan Natives have survived these ordeals, she says, because they’re “a strong, resilient people.”

They need to be because they’re still facing new dangers that threaten their way of life and the land they’ve lived on for thousands of years. “Trawlers are scooping up the salmon that provide the main source of food for many tribal villages,” she says. “Mining and drilling companies now invade the wilderness. There’s an influx of folks who don’t respect our way of life. And big companies are putting up buildings that mar our beautiful pristine land.”

Gina thought of the wide-open spaces she comes from when she went to Washington, DC, to serve on the CDA Advisory Committee at the Council. “I was on the Metro and surrounded by more people than live in some of the villages where I work,” Gina recalls. “Yet it felt lonely because no one was connected in the teeming crowd, unlike the villages where I work. It’s easy to build connections there,” Gina says. So, she feels close to the families she serves.

And her concern for them led her to serve on the committee, she explains. “The rural areas of Alaska are underrepresented in the early childhood community, and most people don’t know much about our interests and needs. It’s like our children and families are invisible to the nation. Yet we’ve been here for thousands of years, and for people not to see us is atrocious,” Gina says. So, she’s determined to speak out boldly on their behalf. By helping them, she benefits, too, according to Chief Seattle, a great Native leader. “All things are connected like the blood that unites us,” he said. “We did not weave the web of life; we are merely a strand in it. Whatever we do to the web, we do to ourselves.”