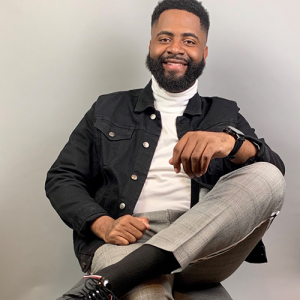 Jarrell Harris knows the power of role models for kids—especially young boys. “A lot of the boys I teach are considered troubled students. Where they grow up, they get the idea that it isn’t cool to learn and have good manners. Some folks say these boys are bad, but they’re being misjudged. They just make bad decisions. So, it’s important to take the time to get to know their backgrounds and build relationships with them. You need to be someone they can look up to and inspire them to develop in ways they never dreamed of before.”

Jarrell knows these boys can do more than people expect of them—because he did. “I come from a very rough background,” he says. “My father left when I was three and I was raised by a single mom.” Yet now he has his own early childhood academy, Empowering Young Lives, located in Steger Illinois. And that’s something he never imagined he could do six years ago when he first began his career in the early childhood field. “Before that, I was working all over the place, everywhere from Cracker Barrel to Chipotle and Kmart,” he recalls. But he’d always loved kids, and he got a chance to work with them when a friend who worked in a day care arranged for him to interview there as an assistant teacher.

“The folks at the day care were really impressed by my interest in the early childhood field,” Jarrell says, “so I got the job. At the beginning, I had only intended to test the waters, but as I worked at the day care, I discovered my purpose in life: I was supposed to be teaching little people.”

Granted, not everyone saw this, and he faced some initial resistance from parents who weren’t used to having their kids taught by a man. “At first, the parents looked at me,” he says, “and I knew they were wondering what this tall man with a big beard was doing here. But my appearance couldn’t mask what I was feeling inside for the kids. And the proof of it was in how the children related to me. In time, the parents came to tell me that their kids talked about me all the time. And when they saw how their children were developing and growing, it opened their eyes to my talent for teaching kids.” Some of the children he worked with found it hard to self-regulate or suffered from developmental delays. But he didn’t give up on them because he thinks “you shouldn’t let a disability limit the ability of a child.”

The response he received from the kids also inspired him to take steps to start his education in the early childhood field. “In 2015, I earned my Child Development Associate® (CDA) credential,” he says. And having a CDA not only made him more competent; it also advanced his career. “When I began working at the day care, I was in a room where they had all the three- to five-year-old children grouped together. On my recommendation, they made a separate room for the five-year-old kids, where I could address their needs even better. And by 2017, I had become a lead teacher and earned my associate degree in education.”

The expertise and experience he gained also made him more marketable and empowered him to “leave the nest of that day care,” as he explains. “I was growing up and had financial obligations, so I decided to spread my wings and search for new opportunities in my field. I went to work for a home day care, where I wound up being the director. At the same time, I was working on my BA in special ed, which I’m now close to completing, and operating my own private gig as a tutor and mentor.”

Last year, Jarrell took his next steps as an educational entrepreneur with assistance from his church. “A local pastor agreed to rent me some space where I could start my own academy and put my ideas about early education into practice. I don’t put much stock in strict curriculums because not all children have the same needs. Some kids are visual learners while others are more auditory learners, so you have to know each child and allow them to follow their own path.”

While Jarrell doesn’t believe in rigid lesson plans, he does set goals for the children. “I want them to learn certain things by the end of the week, but I want them to have some independence and sense of initiative as they’re working toward these goals. Children learn by exploring, by having concrete experiences, and then having you explain to them why we should do things a certain way. This approach produces results, and I find it really rewarding to see the children transform before my eyes.”

The changes he’s seen in his students have inspired him to help young boys who face challenges in life. And recently he started an organization called Empowering Black Males. “Its mission,” as he explains, “is to bring four- to eleven-year-old boys together, mold their characters, guide them and help them discover the greatness they possess inside. We have meetings and hold fun activities like team-building games, charades, pizza parties and water balloon fights.” But Jarrell’s new group also has a serious purpose. He wants to show the boys they can become “gentlemen and entrepreneurs,” just like he did. “I know what these boys are up against because of where I came from. So, I tell them, ‘Brother, give yourself some credit.'”

Based on his own experiences in life, Jarrell knows the young boys can exceed what many people expect them to do. “I’m committed to being a role model for them,” he says. “I want them to know I’ll never stop rooting for them and that they have the power in them to rock the world. I’m convinced you shouldn’t put limits on children, even when they seem to have problems. Kids can achieve much more than you think.”