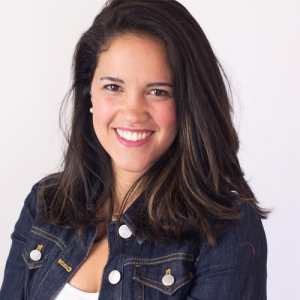 Early childhood teachers often struggle when working with young dual language learners. Some DLLs seem to ignore directions and live in a world of their own. Others appear sad, keep to themselves and refuse to talk. Then there are those who may act out in forceful ways like Carlos, a three-year-old boy who was born in Mexico and attends a public pre-K program. He is still learning his home language and has picked up a few words in English. He enjoys playing in the block area but recently began striking his peers with the blocks. His teacher uses a range of positive guidance techniques to address his behavior, but Carlos only gets more assertive. His teacher doesn’t know what to do to get through to the little boy.

She could find some answers by turning to USTRIVE, an online program that helps teachers work with bilingual learners in a fun, immersive way. “I developed USTRIVE to help teachers break the bilingual barrier,” says Larissa Sales-Sanchez. “In general, young dual language learners go to school,” she explains, “and teachers tell them what to do but the children don’t listen. The teachers think the children have behavioral problems, but the issue isn’t that they don’t want to follow instructions. The problem is that they don’t understand. And even if they do, they’re slow to respond because they’re so busy translating the words in their heads.”

But there are a lot of strategies teachers can use to communicate better with children, Larissa explains, whatever the language they speak at home. “Teachers should speak slower and employ visuals. They should also use sign language, not necessarily American Sign Language, but simple things, like pointing, that American teachers wouldn’t generally do. You need to understand the bilingual brain.”

Larissa does because she faced her own struggles with learning English when she came to the U.S. from Brazil at age 17. “It was hard for me to ask people to talk slowly and repeat things when I first came to the United States. This led me to come up with my own teaching strategy of speaking slowly, repeating myself and affirming what someone else says by saying it again so they knew you got the message.”

Besides, these personal insights into the issues, Larissa has a lot of background in teaching DLLs and she speaks three languages: English, Spanish and Portuguese. “I taught English as a second language to adults in Brazil, but after coming here I decided to switch to early childhood education and spent two years taking college courses in early childhood development and care. I came out of it understanding that the most productive time to teach is in the early years. That’s when people’s brains are most efficient. So, you see results much faster than you do when you teach adults.”

The sooner you reach children the better, as Larissa came to realize while she worked as a bilingual aide in the Framingham, MA public schools and as a program coordinator at Núcleo Educacionista, an organization that teaches students the Portuguese language and Brazilian culture. In this role, she provided translation, interpretation and information to bridge different cultures in her community. She also helped immigrant parents communicate better with schools, an experience that further impressed on her the problems their children faced.

As she counseled parents on how they could help their children learn English, she heard some distressing stories. “There was a lot of crying and frustration,” she recalls. “I had tons of messages on my phone from parents whose children were insecure and unhappy at school. I’m talking about a 13-year-old boy yelling at his mom and saying, ‘I don’t want to go to school because I don’t understand the language.'”

Larissa nipped these issues in the bud after starting her own home day care three years ago. “Little Bear Bilingual Day Care was super multicultural and almost polyglot,” she says. “We spoke Spanish, Portuguese, English and American Sign Language”—all languages that Larissa knew well. But she also realized you don’t have to speak that much of a language to connect with young learners. “Once I had some German students, so I learned a little German. Though I only spoke a few words, the children came to trust me so they would listen and learn.”

Larissa’s young learners also picked up language skills from each other. “The children in my day care were amazing,” she says. “The American kids would speak English to the Spanish kids and the Spanish kids would respond in their own language. My two-year-old students would switch languages constantly and teach each other. With the right encouragement, there are no barriers for little kids.”

Watching them inspired her to break a barrier of her own by getting a degree in this country. “My BA is from Brazil and I didn’t have the money to pay for a master’s degree, so I was thrilled when I heard about the Child Development Associate® (CDA) credential. I loved the books that taught me more about working with different cultures and I loved going through the process. I thought this is amazing: someone will come to my home day care, observe me and I’ll get a widely recognized credential. It was also convenient for me as a busy wife, mother and teacher. It was a huge accomplishment that I could fit in while I continued working at home.”

Larissa has been reaching other teachers in their homes since her family moved to Florida last year and she started USTRIVE. “We offer online courses that help providers worldwide to learn to use the immersion method with children,” she says. “I want teachers to know I’m here to help you understand how you can break language barriers with your Brazilian-, Spanish- and Arabic-speaking students. I have tools they can add to their method of teaching. And if teachers use them, I believe that children won’t be crying because they don’t want to go to school.”

All the strategies that she passes on are based on her first-hand experiences in the United States.”USTRIVE is a summary of my life,” she says. “I developed my own curriculum based on what worked for me with my students and my own struggles learning English as a second language. I had to work hard to achieve my goals and now that I have my own online platform, I’m using it to bridge the gaps that make it hard for teachers to work effectively with bilingual kids. I want to be a channel between American teachers and the immigrant community I want to inspire teachers to strive.”