Birth of a Teacher: A Special CDA® Program at CUNY

Home > Newsletters > Birth of a Teacher: A Special CDA® Program at CUNY 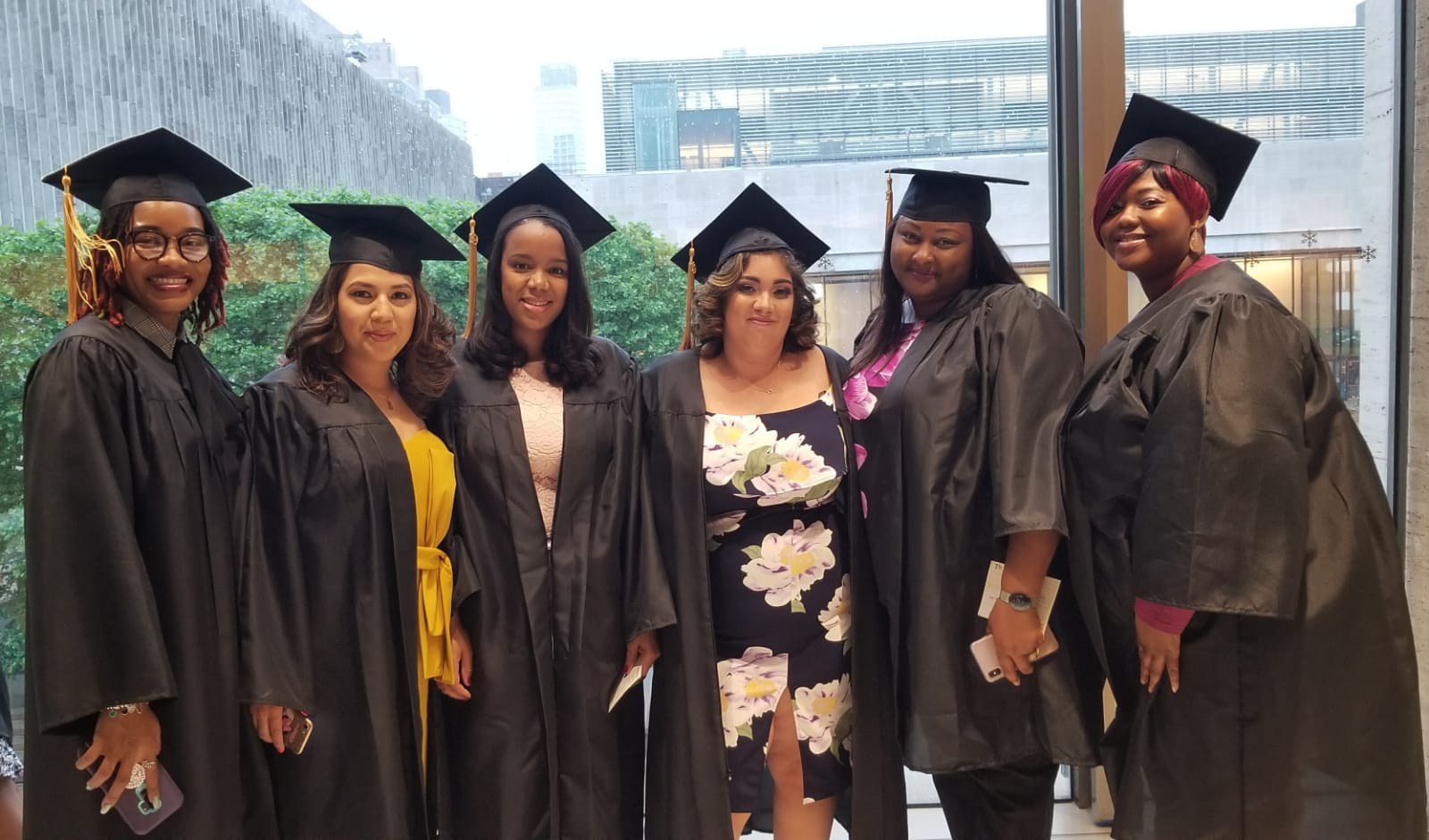 Shontae Ferguson-Pryce was determined to attend her graduation. She dreamed of standing onstage with the 46 other students who’d earned their Child Development Associate (CDA®) Credentials from the City University of New York School of Professional Studies (CUNY SPS). And she, too, had earned the right. She had passed all the courses and done all the fieldwork with young children she needed to get her CDA. There was just one hitch. Shontae was pregnant and the ceremony was scheduled for May 20, 2019 — just about the time the baby was due.

Would she make it to the graduation? The question became a running joke between Shontae and Claudine Campanelli, higher education coordinator at the New York State Early Childhood Professional Development Institute, who oversees the CUNY CDA program and teaches some of the classes. “Shontae found out she was pregnant when she started the program,” Campanelli recalled, “but she promised me she would be at graduation. When I told her that I didn’t think she would make it, she said, ‘I don’t care if I go into labor onstage.'”

Shontae is committed to early childhood care and education because she’s seen how much it helps children develop and grow. Like many of the other CDA graduates this year, she already had a child in Head Start and wanted to give back by helping other children in return. These Head Start moms had their chance because the NYC Administration for Children’s Services (ACS) sponsored them in earning their CDA.

The CDA is a steppingstone to many of the Head Start mothers’ dreams, according to Gary Dunbar, assistant director of the Committee for Early Childhood Development at Head Start. Every year when he meets with parents, he asks them if they have any goals they’d like to pursue. And they often do, as he’s found out over time. “Some of them have dreams they’ve put on hold because they had children,” Dunbar said. “When they come to us and we care for their children, they’re free to follow their dreams again.”

They’d often like to enter the field of education, as Dunbar explained. “For many years, parents would ask me how they can become teachers, so I was happy to learn that ACS had the resources to provide parents with free scholarships that would allow them to earn a CDA. That was extremely encouraging to me because the CDA curriculum gives them all the nurturing skills to work with the age group from birth to five.”

The program also gives them the resources they need to succeed. Besides paying for all their books, tuition and even subway fare, the program hires instructors who are sensitive to the students’ needs. Many of them need extra support because they’re recent immigrants who are still working on their English. Others lack computer skills or simply aren’t used to being in school.

They don’t have traditional undergrad backgrounds, so the program accommodates them in every way it can. “We get them tutors to help with their writing and computer skills,” Campanelli said. “We show them how to communicate with their professors, give them a lot of leeway in getting their assignments done and teach them to be advocates for themselves. We also provide them with a credential specialist who helps them fill out the online application for their CDA credential and makes sure their portfolio is in good shape for the verification visit that follows.”

The Head Start moms also support each other because they go through all their classes as a cohort, unlike enrollees at traditional CDA programs. “Along the way, they form bonds as students and parents,” Campanelli explained. “They also share a deep commitment to young children because they all served as parent volunteers in Head Start.”

Despite everything they have in common, differences emerged among the members of the cohort. There were cultural distinctions, leading to some lively discussions about attitudes toward child care and education. Some students also had backgrounds that made them stand out and helped make the whole group stronger. One mom, Campanelli recalled, was an honorably discharged military vet with “a sense of confidence and inquisitive mind who expanded the conversation in class and encouraged her classmates to look at the details.” Another already had a college degree in business and “helped keep her classmates motivated through two semesters.”

Three of the students showed just how much they’d learned when Campanelli took them to a conference in Verona, New York, held by the New York State Association for the Education of Young Children. While there, they gave two-hour poster presentations on their experiences as volunteers in Head Start. “They were perfect presentations,” Campanelli said, including the one Shontae gave — presciently titled “Birth of a Teacher.”

The students’ dedication to their work came from their passion for helping children. “Even as a child, my dream was to work with kids,” said Marea Wilkes, one student in the program. “Many caregivers don’t understand what kids really need, and I wanted to do things differently. The CDA program gave me a chance to learn what I need to know about children, and I intend to keep on learning because every child is different.”

But they all deserve a good start in life, said Jasmin Jones, another CDA student and now a Head Start teacher for infants and toddlers. “My son was in a Head Start program,” she said, “and I saw the quality education they gave him. I wanted to give something back by working to help other children as well. The CDA program was really important for me because it was going to give me the knowledge and hands-on learning I needed.”

Earning a CDA makes you an effective advocate for children, according to Carmen McKay, yet another student who loved the program. “It can change people’s lives,” she said, “and I know it changed my life a lot. My most rewarding experience was the process of learning more about myself and realizing how far I could go. I’m more confident now and believe that nothing is impossible for me.”

There are pathways for students like Carmen to keep on learning and growing in their field. They earn 12 college credits for their CDA coursework and can transfer them to other programs. CUNY SPS has articulation agreements with several other CUNY programs — Borough of Manhattan Community College, Hostos Community College, LaGuardia Community College and Kingsborough Community College — that have encouraged many Head Start moms to earn their associate degree.

Campanelli keeps up with their achievements because her program keeps supporting them after they receive their CDA. “We reach out to them for events and help them apply to college,” she said. “We assist them in preparing for the New York State teacher certification exam and give them vouchers to pay for the exam application fee.”

Besides supporting their professional goals, Campanelli connects with them on a personal level. “I always want to see where they’re at,” she said, “because I’m not just an instructor, I’m a part of their lives. I want them to stay in touch and share their milestones with me. I’m the biggest cheerleader they have.”

And she was there to cheer them all on when they passed an important milestone: their graduation from the CDA program at Lincoln Center on New York’s Upper West Side. It was a ceremony that the attendees wouldn’t soon forget since Shontae went into labor right after the speakers finished their talks. Despite the pangs she felt, Shontae was still determined to keep the promise she’d made to Campanelli upon starting the program. So, after some quick changes to the schedule of events, her classmates helped her cross the stage and get her certificate, as she had planned. Meanwhile, a police escort showed up to assist Shontae and soon rushed her to the ER. Mission accomplished, the brand-new teacher gave birth to a baby boy she named King.