Published by CounciLINK on September 26, 2019 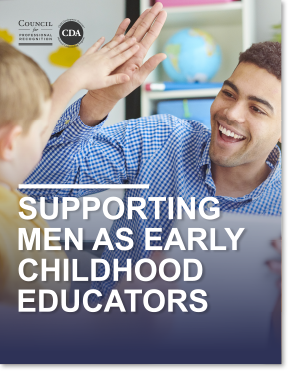 “When we hear the word ‘diversity,’ let’s begin to include gender as part of that definition.” — Bryan Nelson, founder and director, MenTeach.org

Visit any elementary school or early learning center in the U.S., and you are likely to find a common scenario: Women teaching the students or taking care of the children. Getting men in the classroom to instruct, inspire and care for young children is not a new challenge, but one that may have new solutions if our society can flip the script on long-held biases toward men in these roles.

From sideways glances from parents at school to incredulous reactions in social situations (“You work where?!”), some treat male early childhood educators with curiosity or suspicion.

This white paper maps the roadblocks men face in early childhood education and shows how we can surmount them. Bringing more men into the field will benefit our children, boost our industry’s reputation and bolster our entire social fabric.

Today, there is wider acceptance of most jobs being done by both men and women. For more than a century in the U.S., physicians were men; women simply didn’t perform that role. Elizabeth Blackwell changed that in 1849 by being the first woman to graduate from medical school. By 2018, more women were applying to medical school than men.

Like medicine, education is a field where there is no such thing as “too many qualified people,” yet the doors are still ajar at best, and closed at worst, for men who want to educate and care for young children.

The Economics and Social Standing

It’s no secret that those in teaching generally, and in early childhood education specifically, experience low pay. According to the Bureau of Labor Statistics, the median pay for preschool teachers in May 2018 was just under $30,000 per year. Depending on where a person lives and whether he or she lives in a household that has another income, that number can be a deal breaker.

By comparison, the median pay for middle school teachers was $58,600—nearly twice that of preschool teachers. This disparity can discourage many qualified people of both genders from entering or remaining in early childhood education.

“You shouldn’t have to take a vow of poverty to be a preschool teacher,” said Kitt Cox, the director of Birth to Three Family Center in Ipswich, Massachusetts. “But, as a group, we’re too nice to push back.”

At the same time, even though women have increased their presence in higher-paying jobs traditionally held by men, women as a whole continue to be overrepresented in lower-paying occupations. This reality can make it difficult for men to see those professions as viable options financially.

Similarly, the rate of pay reflects how teaching and childcare in general are low in the pecking order of respected professions. This presents its own challenge in terms of recruiting men who have career ambitions that may exceed what they believe a role in a school or an early learning environment can offer.

To read our latest white paper on how and why we should support men as early childhood educators, click here.

Have you read the Council’s previous white papers? These resources cover an array of subjects within the field of early childhood education to inform and engage our members. We’ve addressed topics such as supporting multilingual learners and how to bridge the digital divide for young children. Check out these white papers and others in English and Spanish in our white paper library. And keep an eye on that space for upcoming white papers on important issues in early childhood education and how the Council supports professionals in the field.