Published by CounciLINK on December 20, 2018 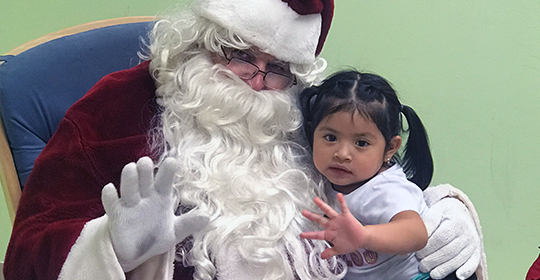 No doubt, many of us enjoy the Holiday Season and the joy it brings in terms of fellowship with family and friends through many ways of celebrating. But it’s the people who selflessly give back to the less fortunate who really put the heart in the holidays.

The Council’s Ron Pukacz is one of those special people.

Pukacz is a member of Baltimore’s Curtis Bay Athletic Association and, since 1960, the group has visited children and their families at various locations in the area to bring them a little holiday cheer. And guess who plays Santa Claus? You guessed it. Pukacz himself.

“It’s part of a remarkable time with these children because they tell you stories that you won’t believe unless you’re there by yourself,” said Pukacz, who has played St. Nick since 1977. “I mean, I hear stories (such as) ‘Get my father out of jail,’ ‘We can’t afford a tree so I’m going to draw a picture and tape it to the wall,’ ‘Santa Claus, do you have clothes for Christmas?’ So I get a lot of stories being Santa.”

Each year, the club – which has roughly 120 members – will hit several locations to see roughly 300 children at each stop. Every child gets a gift, a stocking, ice cream sodas, cake and other goodies. Every child also gets gloves and mittens.

Pukacz said the club also seeks out between six and nine families that are in dire need and donates food and a decorated Christmas tree – delivered, of course, on Christmas Eve.

“The most remarkable thing is that it’s sponsored by an athletic club in Baltimore that’s been in existence since 1938. And for the past 30 years, they’ve done everything they could to help the community, to give back,” said Pukacz, who has gone through five Santa uniforms and nine beards. “This is one of the last real athletic clubs where they play baseball, softball, football, basketball. So it’s a remarkable group of people who are involved with it.”

So how long will he keep playing Mr. Claus?

“I’ve got to do it forever because the story goes that whoever quits passes away the following year,” he said with a little bit of a North Pole chuckle. “That was part of the Santa clause in this contract.”

Pukacz brought his own special brand of joy and good tidings Wednesday to children at the Barbara Chambers Children’s Center in Washington, DC. Pukacz and the Council’s Vilma Williams, who brought her guitar, staged a singalong of Christmas songs for the children. No word on the whereabouts of Rudolph!