Gloria de Llovio-Domínguez: Bringing the Winds of Change to the Early Childhood Field 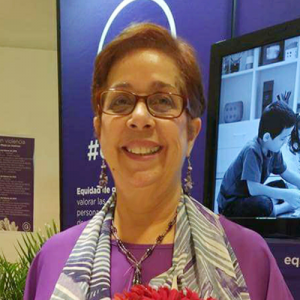 In recent years, catastrophe has struck the Commonwealth of Puerto Rico. In 2017, Hurricane Maria brought heavy winds and rain that flooded neighborhoods and flattened factories, crippled the power grid, killed most of the island’s crops and caused nearly 3,000 deaths. The efforts to rebuild were still underway this year when a string of earthquakes shook the ground, ravaging over 8,000 homes, causing massive drought, and wreaking even more economic havoc.

“Recovery has been slow, because there have been a lot of challenges,” says Gloria de Llovio-Domínguez, an early childhood consultant and advocate for children. Now there’s COVID-19, which has closed schools and caused unemployment to soar. But nothing can shake Gloria’s commitment to help young children and families by giving them the social services and education they need. Since the 1980s, she’s been bringing in the winds of change to the early childhood field.

She first saw the value of high-quality child care services while working in her first career as a social-industrial psychologist for different organizations in Puerto Rico. “I got a job with Head Start as a coordinator for special needs,” she says, “and I was enamored by the field when I saw the impact that early childhood professionals could have on young children and families. So, I moved to California to do a master’s in child development. I taught there for a while in Head Start and was promoted to child development supervisor before returning home to Puerto Rico.” Since then, she has assumed a series of increasingly high-profile roles in shaping the early childhood care and education field.

“When I came back to Puerto Rico, I worked as a trainer of teachers for young children,” she recalls, “and since then I have done so many other things.” To mention just a few of them, she’s been a Professional Development Specialist and assessed candidates for the Child Development Associate® (CDA) credential. She’s also been a regional manager for Bright Horizons, provided consulting services for the Office of Head Start Disaster Recovery Team and managed operations for the Head Start State Training and Technical Assistance Center in Puerto Rico and the Virgin Islands. Recently she was executive director for the Governor’s Multisectoral Council on Early Childhood, where she worked to develop partnerships, policy and a progressive vision for the early childhood field. And now she’s a consultant who trains educational supervisors who, in turn, train teachers in the classroom.

It all adds up to a wide-ranging career. Still, “quality services for children have always been at the forefront of everything I’ve done,” Gloria says. So, she has worked to expand the reach of the CDA in Puerto Rico and ensure that educators have the skills they need to teach young children. “I became involved with the CDA early on because I was working with Head Start, which has long used the CDA to train and certify teachers. I was also part of a group that developed new legislation to make the CDA a licensing requirement for center directors, teachers and assistant teachers.” By 2016, the legislation was signed into law, thanks to the support of Luisa Gándara, a former teacher and member of the Puerto Rico House of Representatives, who is committed to the development of children.

Since then, Puerto Rico has developed a lot of new training centers as more universities and private companies provide the 120 hours of coursework needed to earn the CDA credential. As part of this ongoing move to expand the CDA, Gloria “hopes to continue working closely with the Council to maintain fidelity in the training and professional development process.” So far, most people agree that making the credential a requirement has been good for the field, but getting providers to comply with the regulation has been tricky, she explains. “It’s a challenge because the profits and wages of child care centers are very low, making it hard for them to invest in CDA training. So, integrating the CDA into the legislation has been a balancing act between ensuring quality services through the credentialing process and watching out for the financial wellness of private child care centers, which are mostly women owned.”

These programs have faced especially tough times in recent days. “Many privately owned centers have had to close their doors because of COVID-19,” she says, “and the risks involved have deterred teachers from coming back to promote in-service classes. Besides families often don’t have transportation, so a lot of centers have provided virtual learning.” Yet that, too, has posed challenges. “A lot of families don’t have access to the internet or the equipment they need to communicate with teachers. Many families are also unemployed, including many with children in Head Start. The children are no longer coming to the Head Start centers, so we’ve been distributing food and assisting them in whatever way we can.”

There’s a lot of need, so now Gloria is also lending her services as a volunteer. “I’m a member of the Puerto Rico Child and Youth Task Force, which was created right after the hurricane in 2017 and includes representatives from public agencies, community-based groups and professional organizations. We come together to promote children’s well-being and we’re now in the recovery phase.” As part of the ongoing rebuild, Gloria is also helping Head Start to purchase school buildings that have closed since the pandemic and remodel them as Head Start centers.

She also has a broader mission to remodel the entire child care system and foster a holistic approach that goes far beyond education. “We also need to integrate health, mental health and social services into how we serve Puerto Rico’s children,” she says. “We need to bring Head Start, private child care services, preschool services within public schools, home visiting programs, child abuse prevention agencies and public health services all together in common projects. We must see children as whole human beings and serve them from the time they’re born to the time they enter school. If we do, they’ll be ready to succeed in both school and life.”

But we can’t give children the support they need, she explains, without supporting our early educators, too. “The most important time in a person’s life is the early years since that’s when you lay the foundation for their development going forward. So, the professionals who do that should be compensated very well. There’s no reason why a university professor should be better paid than a preschool teacher,” she says, “because how a student performs in higher ed often depends on whether they had a quality preschool education. “If you’re a university professor and you’ve taught students with deficits, you know that these deficits started in early childhood. You have to be sure you build a good foundation.”

When you give kids a strong start, it feels good, as Gloria knows. “The reward of my job as a trainer and consultant is seeing professionals who work with children directly or assist teachers to become enthusiastic about what they do. And on the government levels I work at, I get to institute policies that have an impact—whether it is providing quality services in the classroom, professional development or administrative support.”

Gloria’s work has crossed the spectrum as she works on both the policy level and the direct program level by giving technical support. As she looks back on her career, she sees the different advantages of both. “If you provide technical assistance to individual programs, and the teachers implement it, you see the differences in children’s outcomes.” But your work only affects a small group. You can make a bigger difference by working on the policy level, as Gloria has seen, “though it takes years for your work to blossom and make an impact.” But whichever level you work at, “you need to have faith, commitment, and the understanding that you can’t produce change all by yourself.”

It’s one of the lessons she’s trying to pass on as she approaches her retirement years. Though that’s still some time ahead, she’s now working on the legacy she’ll leave behind. “What I always keep in mind as I work is how I can impact young professionals in the early childhood field. When I meet someone who is young, committed and passionate, I try to share my knowledge and resources. I try to spark their interest so they can continue the job when I’m done. I try to reach out to those young professionals and make them realize we need to work together to serve people in need.”

It’s crucial right now for “everyone to be on the same wavelength,” as Gloria points out. No member of the early childhood community can afford to be an island on the hard-hit island, as it deals with the fallout of disasters that have destroyed many lives. “Since it’s a very hard battle to win, we must do a little bit here and a little bit there to build momentum,” Gloria says. So, she urges those who care about children in the Commonwealth of Puerto Rico to coordinate their resources and their efforts. “We need to stick together to serve children and families in need.”