Las Vegas Teacher is an All-Star with Kids

Home > Newsletters > Las Vegas Teacher is an All-Star with Kids 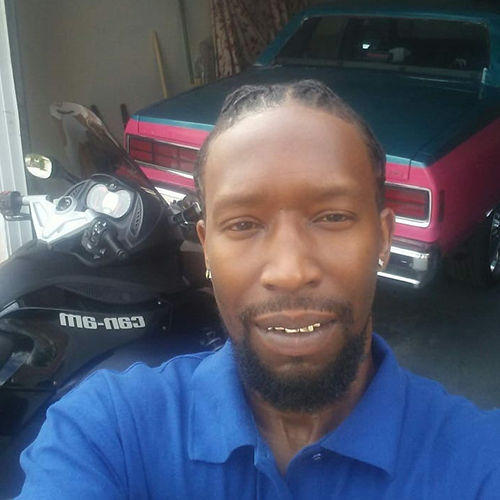 Kids can pick up crucial life lessons from shooting hoops. Playing basketball teaches children about the value of teamwork and cooperation. They can learn the importance of patience and why it pays to keep your cool even when you’re upset. They can find out useful things while having fun, as Cedric Bell has come to see. He coached basketball to young children at the Boys and Girls Club in Las Vegas for years, and it also taught him something about himself. He’s a perfect fit for the early childhood profession, though he didn’t begin teaching until he was nearly 40 years old.

Before that, he’d been in a number of different fields while having five children of his own. “After high school,” he recalls, “I went to Job Corps to learn a trade before going into the armed services. Then I drove a school bus for a short time in Texas and spent about nine years driving for American Van Lines and Walmart Distribution Center. In 2009, my youngest son was on the way, so I decided it was time to stay home and watch my kids grow up. I joined the PTA and volunteered at the Boys and Girls Club as a basketball coach for 3- and 4-year-olds.”

Acelero Learning, a local Head Start center, was right behind the Boys and Girls Club, which led Cedric to have a life-changing encounter about two years ago. “I happened to be coaching the son of the center’s director, who saw how good I was with children. She said, ‘You’ve been here two or three years, and you’d fit right in over at Acelero. You just have to get your Child Development Associate® (CDA) credential. So, I signed up for the course at the at the University of Nevada and began working at Acelero as a floater. I just got done with the CDA this May—in the midst of the pandemic—and I’m now an assistant teacher.”

Cedric always had a way with children, but the coaching he received during his CDA training helped him up his game. “The CDA made me a better teacher,” he says. “It helped me understand why I was doing things a certain way instead of just winging it. I learned more about how to approach certain kids and how to bridge the language barrier with kids who don’t speak English. It’s made me want to go on in school and earn my BA so I can be a lead teacher.” But he already knows a lot about helping kids score in both school and life.

Some of the children he works with don’t know how to share, so he tells them why they shouldn’t hog the ball. “I sit down and talk with them. I take my time to explain to them why you can’t snatch a toy from another child, and they come to understand,” Cedric says. He knows that “a coach is someone who can give correction without causing resentment,” as basketball legend John Wooden maintained as he led UCLA to set records that astounded the world. And this gentle but firm approach also works with the kids who have behavior problems. “I try to find out what’s bothering them and ask them how they’re feeling,” Cedric says. “And eventually I reach them all.”

The key, he explains, is to communicate with the children. “I know they’re young, but I treat them with respect. When I go into a class, I make it my business to spend five minutes with each child, and of all the things I do, I think that’s what draws the kids to me most.” And that makes him an all-star at Acelero. In the kids’ eyes, Dr. J. has nothing over on Mr. C., as the children like to call him. “They know,” he explains “that ‘Mr. C. is going to talk to me, Mr. C. is going to listen to me, and Mr. C. is going to play with me.”

Many of the children crave his attention because they don’t always get enough of it at home. “Some of the parents get off work,” he explains, “and they’re so tired they don’t want to do anything with their children. They just put them in front of the TV, so the only time the kids have a chance to get their energy out and have someone to talk to is when they come to the center. I help them learn, but I also make it fun for them so that they want to come to school.”

What he achieves with the kids shoots down any doubts the parents might have about leaving their children with a male teacher. “Sure, some parents are on the defensive, he admits, “and might hesitate when they meet me on the first day of school—especially since I’m the only male teacher at the center. But I change their minds in due course when they see the changes in their children. For example, one Ethiopian mom brought her son to school at the start of the year and told me he didn’t speak English. He was bottled up and scared of his new surroundings. But I used things he understood, like colors and numbers, to help him open up. I also teamed him with other children to improve his language skills, and it all worked. He went from being shy and not speaking a word to chattering up a storm. He’s a whole new child.”

Cedric enjoys seeing changes like that, he explains. “I love watching children progress from not being able to write their names to knowing the alphabet and counting. As you work with them throughout the year, you see that progress, and that makes me feel good”—just like he did when he coached little boys on the basketball court. “I worked with 3-year-olds who had never touched a ball. By the end of the season, they’re dribbling, they’re passing and they’re telling me thank you.” In both preschool and sports, “all kids need a little help, a little hope and someone to believe in them,” as NBA All-Star Magic Johnson once put it. Cedric is someone who gives them what they need. And that makes him a slam dunk for the early childhood field.