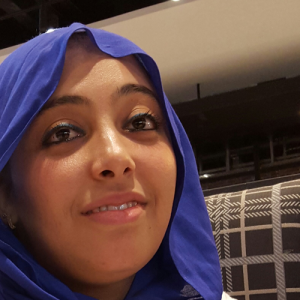 “A teacher is almost like a prophet in Islam,” Fatima says. And you see what she means by reading this passage from the Koran. “The Prophet Muhammad cared for teachers and showed their elevated standing. Once he passed by two circles of people; the first was supplicating God while the other was listening to a teacher. He commented, ‘The first was pleading to Allah who may or may not give them what they want. The second was learning. I have been sent here as a teacher.’ Hence he joined the second group.”

Fatima has followed the Prophet’s example by enrolling in the Pamoja Early Childhood Education Workforce Program. The goal of this pilot effort in Colorado is to increase the number of early childhood educators who are fluent in multiple languages. They’re essential for meeting the state’s growing need for diverse educators who can serve young children living in poverty, dual-language learners and children with special needs.

Pamoja is the brainchild of Deborah Young, CEO and executive director of Empowering Communities Globally, an organization that works to support women and groups that serve infants, children and families. She teamed up with Lauren Dorn, the women’s integration coordinator at Lutheran Family Services Rocky Mountains, who has worked for over a decade with immigrant and refugee women. These women love their children and want to be even better mothers, as Dorn had come to see. “So, why should we not bring them into the field of early childhood education,” she thought, by helping them earn their Child Development Associate® (CDA) credential.

The program opens doors for women like Fatima, an immigrant from Morocco who was looking to better life for her husband, three children, and herself. “When I came to Denver in 2015,” she recalls, “I was working as a room attendant in a Sheraton hotel. The job kept me so busy I didn’t have time for my children. So, I started thinking about going to work in a child care setting or school. And I was excited when a friend, who is also Moroccan, told me about a program that would give me the training I needed in both Arabic and English. I was very happy to find something that would be good for me and good for my children.”

Earning a CDA, as Fatima points out, would allow her to find a new career and earn money to help her family. Also, it would give her the knowledge she needs to raise her children in a new country. “In Morocco,” she explains, “the culture, education system and community are different than they are in this country. Both parents and teachers are sterner than they are here, and religion plays a bigger role in the classroom. So, I needed to take my experience and adjust it to meet the expectations of my new home in the U.S.”

Fatima already had some knowledge of child care since she had worked at a preschool in Morocco after earning her BA about 13 years ago. She had intended to teach middle school, but all the open positions were very far from her home. So, she changed her plans and then found that she liked teaching young children. She also realized that “teaching them is a big responsibility,” a conviction that is part of her culture. The Koran explains that “a teacher is like a candle that consumes itself to light the way for others.” Or as Fatima puts it: “A teacher takes children from the dark side to the light side.”

The CDA also showed her the light since it gave her more knowledge and know-how for working effectively with young children. “I liked working in child care when I was 23,” she says, “but I’ve learned things in my CDA classes that will make me a much better teacher. And Pamoja made it easy for me to take the classes I needed to earn my credential. They do the program in both English and Arabic, so we understand very well what’s going on in class.” Granted, doing the homework in English posed a challenge, but the Pamoja program helped by sending her to English classes at the Spring Institute, a provider of intercultural services and learning programs. She also has coaching from a mentor who meets with her each week to give her the support she needs to complete her credential.

Fatima has finished her CDA coursework and is eager to gain the 480 hours of experience in a child care setting that’s required to earn the credential. “I’m waiting for funding from the Colorado Child Care Assistance Program,” she explains, “because I have a 13-month-old baby. In the meantime, I’m practicing what I’ve learned on her and my other two children. After taking the CDA classes I know more about how a child’s mind works, and it’s made me a better parent. Now the challenge I face is to help my kids strike a balance between our culture and that of our new country. I don’t want my children to forget our background and lose the sense of community they have.”

Fatima also wants to convey this lesson in diversity and inclusion when she completes her CDA and works in an early childhood classroom. “I want to teach children to accept everybody,” she says. “Whatever our race or religion,” she points out, “we have a lot in common. Our humanity is what joins us, and it should come first when we’re together. Religion is something between you and God, not you and others,” Fatima insists since she knows how it hurts when you feel like you don’t belong.

“When I first came here,” she recalls, “I felt like I wasn’t part of this country. I am a Muslim and faced prejudice. I made mistakes speaking English, and I felt that people didn’t like me. Then I got the job at the Sheraton and started meeting guests. Many of them were good people and we connected. I started to feel more confident,” she says. And she’s now using the life lessons she’s learned to empower other immigrant women like herself.

Fatima is now taking the Spring Institute’s Parents to Advocates Leadership Training Program, where she’s learning to work on her community’s behalf. “I’m collecting interviews and doing research on the problems Arab women face,” as she explains. “The program also gives me a chance to meet state decision makers and social justice advocates who are working on similar issues. And I look forward to increasing my knowledge by talking to different families once I get the funding for child care and start teaching at a preschool.”

Her plan is to work near her home at a center that serves families from several different backgrounds. “They have Spanish, American, African and Arab children,” she says, “and I want to teach them to love, accept and help one another. That’s a good foundation for children, and the Pamoja program has encouraged me to promote inclusion in the early childhood classroom,” she says. So has her background because “the Koran teaches us the value of tolerance for all.”