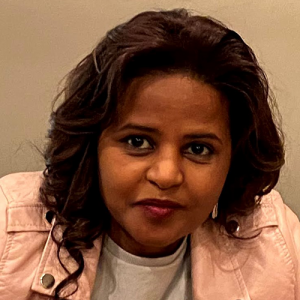 “I had my first child, Efrata, a year after my mother passed away,” Sebawit Yirsaw recalls. The loss hit her especially hard because the Ethiopian culture from which she hails puts a premium on family and expects extended family members to guide new moms. “I didn’t know how to stop my daughter from crying. I didn’t know how to hold her. And I didn’t know the many other things it takes to raise a child,” Sebawit says. She also didn’t have much support after arriving in the U.S. as an immigrant and single parent.

Before that she lived in Italy where she worked for high-fashion houses like Gucci and Yves Saint Laurent. “I was trained as a seamstress and managed the tailoring room. But I gave it up as my world came to revolve around my children, Efrata and my second daughter, Faith,” as she explains. Though she had a strong background in customer service and design, along with a keen, creative bent, she was looking for a fresh start after making a new home in Washington, DC. Her search for community resources and work would change her life and lead her to a career in the early childhood education field.

Sebawit’s journey from concerned parent to ECE professional began about 10 years ago when she put her children in the Mazique Parent Child Center in northwest DC. “Efrata was about 18 months old, and she was anxious about being without me,” Sebawit recalls. “It was hard for me to leave my child crying, so I began volunteering at the center. Less than a month later, the center director asked me if I wanted to work there as a substitute teacher. As I became more involved in my job, I began reading up on child development and interaction. The director was impressed and pushed me to earn my Child Development® (CDA) credential.”

When she found out CentroNía was offering the CDA classes for free, she visited the center and was impressed by how they were taking care of the children. So, she put her own children in CentroNía while she worked there part time as a teacher and took the CDA classes. “It was challenging,” she recalls, “to study and work while I had two young children, but I didn’t feel the weight of the challenge because early childhood was becoming my passion. Earning a CDA was very enlightening for me from the first day of class,” she recalls. “I learned so much about the theories of child development and teaching from my instructors, Heriberto Velasquez, Rosa Moraes and Esteban Morales, who leads professional development at CentroNía. They became my mentors and helped me succeed in the class.”

The director who was there at the time also encouraged her to go on with her education. “I earned my associate degree in early childhood education and my bachelor’s in human development. I’m now working toward my master’s in curriculum and development,” she says. And all the education she received made her see that she was her children’s first and most important teacher, a key lesson she shares with other parents. “Everything I learned I applied to my own children and those of others. I also came to see that my job wasn’t just about supporting children but about supporting families as well.”

CentroNía serves a very diverse population, Sebawit explains. “Most of the children I’ve worked with were not from around here. So, it’s very important for educators to understand the children’s different cultures and backgrounds. Some of the children who come from other countries at an early age don’t speak English, so they have trouble making friends or making themselves understood by the teacher. Each child is unique. So, an Ethiopian child, for example, might be less willing to speak up for themselves than a Latino or white child since they’re brought up never to question their parents. Some children eat with their hands at home, and they’re confused when they come to a center and have to eat with utensils.” In short, “teachers need to be sensitive to these different issues, so children can keep their family traditions and still connect to the wider community around them.”

In recent decades, the community around CentroNía has changed with the growth of the Ethiopian population in Washington, DC. This posed a challenge for CentroNía as it strived to train teachers who could guide children in the right way. For many years, the center had only offered the CDA in English and Spanish. So, the growing number of women who spoke Amharic, the official Ethiopian language, were largely left out. CentroNía found itself rejecting many applications from Amharic-speaking women due to their lack of proficiency in English. The applicants the center did accept had to take the course in English and tended to fail the exam, Sebawit says. “That shows me they didn’t understand the material in the program.”

Yet the applications from Ethiopian women kept pouring in at CentroNía. In 2018, the women’s continued interest in the CDA convinced the center to offer the credential In Amharic. Esteban Morales, Sebawit’s great mentor, did the behind-the-scenes work to start the exciting new program and enlisted her as a teacher. She not only had the knowledge of ECE, but she also knew how to connect with people. “I transferred my customer service skills to working with the CDA students,” she says. “When they took the course with me, they had many aha moments. The CDA opened up opportunities for people, who reminded me of myself, and allowed them to succeed in the ECE field.”

The response to the program was amazing, Sebawit recalls, as CentroNía began to market the classes. “We put flyers up in churches, Ethiopian stores and restaurants. Then it was mostly word of mouth because the Ethiopian community is very close knit. Every day, we received applications, and we accepted 30 women into the program. I taught some of the courses, provided them with resources and helped them put their CDA portfolios together. I also helped them prepare for the CDA exam, available in Amharic thanks to translators who were provided by the center.”

Twenty-nine of Sebawit’s 30 students earned their credential, and on January 16, 2020, the nation’s first Amharic CDA program graduated its first class. Soon afterward, they all came to a reception, along with their instructors and CentroNía directors, at the Council for Professional Recognition. The women showed up in gorgeous traditional garb that could give a few fresh ideas to designers like Gucci. But the festive event wasn’t just a chance for the graduates to dress up and celebrate their success. It was also a recognition of the work it took to establish the pioneering program. It wasn’t easy to find translators and ECE instructors who spoke both English and Amharic. Finding this bilingual staff is an ongoing challenge. So, Sebawit’s contributions to the program are crucial.

She’s still involved as people continue to reach out to her to take the program. “I just finished training the second Amharic-speaking CDA cohort of 34 students,” she says. “Most of students are now working in the field though the pandemic has prevented them from taking the exam and having an observation. But I still meet with them once a month on Sundays to go over the CDA material, so they don’t forget it.” And Sebawit is glad to put in the extra effort to help them. “They’re really interested, and I enjoy being with them,” she says. She feels a personal bond with her CDA students because most of them are concerned parents, like she once was. “They earn a CDA so they can support both their own children and those of the community around them.”

They’re well positioned to make an impact by helping young children adapt to their new homeland. “They understand Ethiopian culture and just need the research-based knowledge of child care,” Sebawit points out. “I tell them the CDA gives them the chance to build a new career. And that was my own experience,” she says as she looks back on her journey from working for Gucci to guiding new teachers in shaping the next generation.

Sebawit still uses her keen eye and sense of taste to help friends decorate their homes and dress up for special occasions. But she finds her work more fun—and more meaningful, too. “The foundation of our community is the early childhood profession because we are shaping tomorrow’s politicians, doctors and engineers,” she points out. Sebawit doesn’t miss the world of high fashion because she has a higher goal. Her passion now is to help fashion lives.